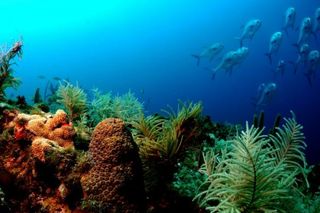 Temperature extremes and the destruction they cause have been big news this year, with large swaths of the southern United States in the grip of record-breaking heat waves that devastated flora and fauna.

Yet temperature extremes also take a toll on life that dwells in the ocean , where the results are far less accessible to TV news crews than the bone-dry landscapes and wildfires on display in Texas this year.

Last year in Florida, it was the unusual cold that wreaked havoc. Researchers have begun to unravel the effects of the frigid weather on some of the Sunshine State's most vulnerable inhabitants. The damage apparently included one of the worst coral die-offs ever recorded in the United States.

In January 2010, Florida was hit with the coldest 12-day period since 1940, according to the National Weather Service. Temperatures hovered around the freezing point, destroying millions of dollars of crops; at least two people in the state died from cold exposure.

Beneath the waves off the coast, Florida's coral reefs, some of the largest in the United States, were hit especially hard by water temperatures that, in some areas, plunged to 51 degrees Fahrenheit (11 degrees Celsius). [Weirdo Weather: 7 Rare Weather Events ]

Overall, some of the largest reef-building species suffered a 40 percent death rate. At some specific reefs, that number was 100 percent.

"It looked more dramatic than anything we'd seen in the past," said coastal ecologist Diego Lirman, an associate professor at the University of Miami and lead author of a study published this month in PLoS One.

Lirman, joined by an army of colleagues and volunteers, spent four weeks during and immediately after the severe weather surveying the aftermath along the Florida Reef Tract, a dotted line of reefs that curves for 160 miles (260 kilometers) from Miami to the Dry Tortugas .

Lirman said the dive teams were met with eerie scenes. "We saw dead corals all around, dead sponges, soft corals that were either completely dead or on their way out," he said. Although the study didn't include them in the count, Lirman said that even fish, which make the reefs their home, were far more sparse than usual.

"It really looked like a major bleaching event had just happened, but the water was cold," Lirman told OurAmazingPlanet.

Bleaching, a phenomenon generally associated with overly warm water, is the term used to describe what happens to stressed corals that eject the symbiotic algae that dwell within them. In normal conditions, the two organisms share a cozy life together. The algae get a nice, safe place to live and photosynthesize; in return, they provide life-giving sugars to their coral hosts and infuse them with color. [Colorful Creations: Incredible Coral Photos]

However, when corals feel environmental stress, whether from temperature extremes or ocean acidification, the algae are expelled. Without the algae, the coral begins to starve. The tissue turns transparent, allowing the bone-white skeleton beneath to show through.

"This went from quickly bleaching to mortality within days. I'd say within less than a week," Lirman said, adding that the event was far more deadly than past warm-water bleaching events in the region.

Lirman's study documented the magnitude and scale of the damage; temperature gauges in place since 2005, coupled with satellite data, confirmed that the cold waters were associated with the high coral death rates. Another study, published in the August edition of the journal Global Change Biology, took a look at the physiological effects of the cold temperatures.

Researchers at the University of Georgia, armed with the temperature data from the Florida cold spell, put three different coral species through the rigors of cold-water living in lab conditions that mirrored the chilly temperature changes that unfolded along the Florida reefs in early 2010.

"We found the response to be very similar to warm-water bleaching," said Dustin Kemp, a coral eco-physiologist and post-doctoral research associate who led the research.

As to whether hot- or cold-water bleaching is more deadly for coral reefs, Kemp said it's all a matter of scale.

"One degree Celsius [1.8 F] above the normal summer temperatures will cause bleaching; usually the temperature goes back down and that's when recovery occurs," Kemp told OurAmazingPlanet.

In contrast, the Florida waters were a full 14 degrees F (8 C) below normal. If summer temperatures veered so far above the warmest norm, "I'm sure it would be catastrophic as well," Kemp said.

Some of the corals hardest hit in the die-off were from the genus Montastraea large, boulder-size corals. Many colonies were centuries old, and, having survived past hurricanes and bleaching events, formed the hardy backbones of the reef ecosystem.

"These Montastraea grow really, really slowly," said Nancy Knowlton, a coral reef biologist at the Smithsonian Institution, who was not associated with the studies. "They're kind of like the redwoods of the coral reef. So something that kills large numbers of these large colonies of major reef builders is very bad."

Although Knowlton said warming, not cold, is a far bigger concern for coral reefs , she said the mass die-off is a big problem. Climate change is expected to bring more weather extremes of all types, though, which includes cold snaps.

"Reefs are in such a precarious position around the world, so anything this bad is bad there's no room for additional sources of mortality," Knowlton told OurAmazingPlanet.

Florida's coral reefs have already suffered steep declines in recent years . The square footage of the state's coral reefs dropped 44 percent between 1996 and 2005, according to the Florida Department of Environmental Protection.

And concern over the decline of coral reefs in Florida isn't merely a question of underwater aesthetics. According to the Florida DEP, most of Florida's sport fish species and many other marine animals spend significant parts of their lives around coral reefs.

"Large, live corals provide the foundation of the entire coral reef ecosystem. Fish, shrimp, lobsters all those animals succeed where there is lots of live coral," Kemp said.

While there is no immediate way to avoid cold snaps or scalding temperatures, Kemp and Lirman said there are ways to lessen the magnitude of their effects.

Keeping oceans pollutant-free and making sure fisheries don't rid reefs of key predators and grazers are two of several strategies available to protect reefs from further decline, they said.

"We can manage that," Kemp said. "So if we reduce some of the local stressors, that can allow the reef to be more resilient to potential weather and climatic stressors in the future."