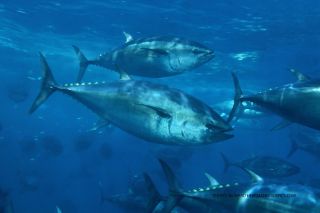 Populations of bluefin tuna in the western Pacific Ocean are down by nearly 97 percent from pre-fishing levels, according to a stock assessment by researchers.

"We found the Pacific bluefin stock is being overfished," said Steve Teo, a fisheries biologist at the Southwest Fisheries Science Center in La Jolla, Calif., who was involved in the assessment.

The news comes a few days after an enormous, 489-pound (222-kilogram) tuna fetched $1.76 million at a Japanese auction, the Associated Press reported. Strong demand for tuna, primarily for use in sushi, has driven increased harvesting of the fish. Over the past 15 years, its population in the western Pacific has steadily declined and is now at or near an all-time low, Teo told LiveScience.

There are currently no catch limits for tuna in the western Pacific. About 90 percent of the fish that are caught are juveniles, according to the stock assessment.

Amanda Nickson, director of global tuna conservation for the Pew Environment Group, called for a temporary halt to fishing. "We think the most responsible thing to do is to suspend the fishery until we can put measures in place that will ensure that the population decline is reversed," Nickson said.

She called on the governments of the countries that harvest the fish —including Japan, Taiwan, South Korea, Mexico and the United States — to do something about the tuna's plummeting numbers.

Nickson said that fishers should avoid catching tuna in their breeding grounds, which is currently a common practice since it's an easy way to find a lot of fish in one place; she also urged fishers to target larger, mature fish, allowing more fish to survive to be able to reproduce, she said. She also suggested that overall catch limits should be put in place for the entire Pacific Ocean.

Pacific bluefin tuna migrate between the eastern and western Pacific. In the east, a quota was placed on the number of fish caught for the first time last year. This is a good — albeit insufficient — first step toward managing the species, Nickson said. But it makes no sense to have a quota in the east and none in the west, when the fish traverse both areas, she said.

What happens if fishing doesn't decline? Teo said fishery scientists don't know exactly the outcome, but they are concerned that bluefin tuna numbers could decrease low enough that the fishery would collapse. "We may get into really serious trouble," Teo said.

"If the fishing continues as is, the species is on its way to [disappearing]," Nickson added. "But with good management, it could reverse its decline."