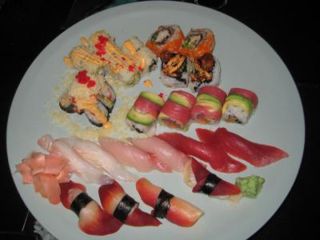 Some species of tuna, particularly those that restaurants value for their firmer flesh and appealing look — such as bluefin akami — have higher mercury levels than other species typically found in grocery stores. Here, a plate of sushi with several pieces of tuna in the center (dark red is akami; light pink is toro).
(Image: © Joanna Burger)

Tuna sushi from your local supermarket might have lower mercury levels and so be safer to eat than sushi from a high-end restaurant, a new study using fish DNA suggests.

The results show that some species of tuna, particularly those that restaurants value for their firmer flesh and appealing look — such as bluefin akami and all bigeye tuna — have higher mercury levels than other species typically found in grocery stores.

The research could lead to better labeling to help tuna eaters cut down on the amount of mercury they consume, something that can have toxic effects, the researchers say.

"So far, the U.S. does not require restaurants and merchants to clarify what species they are selling or trading, but species names and clearer labeling would allow consumers to exercise greater control over the level of mercury they imbibe," said study researcher Jacob Lowenstein, a graduate student affiliated with the American Museum of Natural History in New York, which conducted the genetic part of the research.

While previous studies have identified a difference in mercury levels between tuna species, those studies weren't necessarily reliable because they didn't have a fool-proof way of determining which tuna came from which species, said study researcher Joanna Burger, a professor at Rutgers University.

The new study used a technique called DNA barcoding to identify which tuna came from which species. With this method, scientists use a specific DNA sequence from an organism — called a species "fingerprint" — to match a sample of unknown origin with a certain species. This comes in handy for identifying tuna species, since distributors and supermarkets don't often know exactly what type of tuna they're selling, Burger said.

"[This is the] first study where every sample of tuna that we examined was barcoded so that we know for sure what the specie is, there was no guess work," Burger said.

For now, consumers should be aware that that ordering tuna sushi could come with risks.

"The range of mercury in tuna is very great, so you're taking [a] risk if you don't know what kind of tuna you're eating," Burger said.

The researchers took sushi samples from 54 restaurants and 15 supermarkets in New York, New Jersey, and Colorado. The samples were identified as being from as bigeye tuna, yellowfin tuna or one of two bluefin tuna species.

The average mercury levels in bluefin akami were higher than those permitted by the US Food and Drug Administration (1 part per million, or ppm).

The varying mercury levels between the species are partly due to the fact that mercury accumulates more in muscle than it does in fat, leading to higher concentrations in the leaner bluefin akami.

However, yellowfin tuna are also lean, but they might have lower mercury levels for a few reasons: They are smaller than other tuna, don't eat as much, and tend to be killed at younger ages, so they don't accumulate mercury for as long as other species.

The results were published online today in the journal Biology Letters.

Mercury is toxic to humans, and trace amounts can be found in fish. The mercury levels increase as you go up the food chain, with predatory fish generally having higher levels since they feed on smaller fish and thus accumulate more mercury through their diet.

The element poses the greatest risk to unborn fetuses, since their brains are still developing and their bodies are very small compared with an adult. Exposure to high mercury levels in the womb can lead to cognitive problems and learning disabilities later in life, according to Burger.

Women who are thinking about having children should also watch out for high mercury levels, since the element can accumulate in muscle tissue, Burger said.

Children and adults have been known to come down with mercury poisoning, which can cause neurological and mobility problems.

Adults who get mercury poisoning like actor Jeremy Piven in 2008, have probably eaten tuna steaks or swordfish two or three times a week, or tuna sushi three or four times a week, according to Burger.

While there aren't any hard-and-fast rules when it comes to eating fish, which has known health benefits, Burger recommends the following:

In 2004, the FDA issued guidelines for pregnant women, women of childbearing age and young children about how much fish to consume. The report recommended this group eat no more than 12 ounces (two servings a week on average) of canned light tuna and other types of fish, such as salmon and catfish. The report recommended against eating any shark, swordfish, king Mackerel, or tilefish because these fish tend to have higher mercury levels.