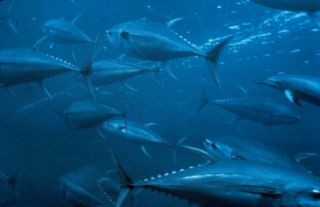 Five of the eight species of tuna now qualify as threatened or near-threatened, according to the world's main authority on the conservation status of animal species. The tuna face a bleak future if more isn't done to safeguard them from overfishing, researchers warn.

Published today (July 7), the draft assessment of the International Union for Conservation of Nature's Red List of Threatened Species shows most tuna species are declining.

"If no changes are made to current fishing practices, the western Atlantic bluefin stocks are at risk of collapse, as they are showing little sign that the population is rebuilding following a significant reduction in the 1970s," Carpenter added.

Some of the tuna species are heavily overfished by difficult-to-regulate multinational fisheries, which find those fish highly profitable, IUCN researchers said. The study authors state that governments need to firmly resolve to protect against the overexploitation of fish species driven by high prices.

Because tuna are predators, the dwindling populations can significantly affect the balance of the marine ecosystem, researchers noted.

Complete results of the tuna species assessments will be published on the IUCN Red List of Threatened Species in November.