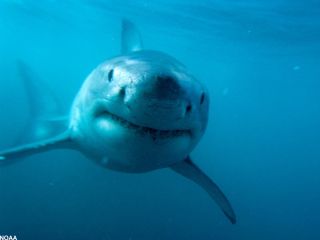 More than 50 percent of wide-ranging oceanic shark species are threatened with extinction as a result of overfishing, according to a new study.

The team determined that 16 out of the 21 oceanic shark and ray species that are caught in high seas fisheries are at heightened risk of extinction due primarily to targeted fishing for valuable fins and meat as well as indirect take in other fisheries.

In most cases, these catches are unregulated and unsustainable. The increasing demand for the delicacy "shark fin soup," driven by rapidly growing Asian economies, means that often the valuable shark fins are retained and the carcasses discarded.

This is the first study to determine the global threat status of 21 species of wide-ranging oceanic sharks and rays, said study leader Nicholas Dulvy of the Centre for Environment, Fishers and Aquaculture Science, Lowestoft Laboratory in the United Kingdom.

The findings, as well as recommendations for conservation action, are detailed in the latest issue of the journal Aquatic Conservation: Marine and Freshwater Ecosystems. The research was funded by the Lenfest Ocean Series Program.

Sharks and rays are particularly vulnerable to overfishing due to their tendency to take many years to become sexually mature and have relatively few offspring.

“Fishery managers and regional, national and international officials have the opportunity and the obligation to halt and reverse the rate of loss of biodiversity and ensure sharks and rays are exploited sustainably,” Dulvy said.

"The current rate of biodiversity loss is ten to a hundred times greater than historic extinction rates, and as humans make increasing use of ocean resources it is possible that many more aquatic species, particularly sharks, are coming under threat," said Dulvy, now based at Simon Fraser University, Vancouver.

"This does not have to be an inevitability. With sufficient public support and resulting political will, we can turn the tide," he said.

The group’s specific recommendations for governments address the need to:

* Establish and enforce science-based catch limits for sharks and rays.

* Ensure an end to shark finning (removing fins and discarding bodies at sea).

* Improve the monitoring of fisheries taking sharks and rays.

* Invest in shark and ray research and population assessment.

* Cooperate with other countries to conserve shared populations..

"The traditional view of oceanic sharks and rays as fast and powerful too often leads to a misperception that they are resilient to fishing pressure," said team member Sonja Fordham, deputy chair of the IUCN Shark Specialist Group and policy director of the Shark Alliance, based in Belgium.

"Despite mounting evidence of decline and increasing threats to these species, there are no international catch limits for oceanic sharks," she said. "Our research shows that action is urgently needed on a global level if these fisheries are to be sustainable."