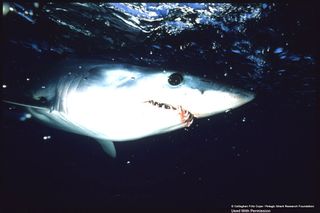 There are two species of mako sharks: longfin and shortfin. Shortfin makos are better known and are widely sought by game fisherman. They are famous for their speed Ã¯Â¿Â½up to 60 mph -- and for their ability to leap out of the water. Part of their swiftness stems from a specialized circulatory system that prevents heat loss and allows them to maintain a body temperature much higher than the surrounding water.

A diver who suffered a fatal shark bite in the Bahamas this week is part of a trend of increasing attacks around the world despite plummeting populations of the majestic fish. If sharks are so threatened in the world's waters, why are attacks on humans on the rise? Because the global population of humans is growing fast, so more people go to the beach, said George Burgess, curator of the International Shark Attack File at the Florida Museum of Natural History. And nowadays, beach-goers don't just go for a dunk. They hang out in shallow water (home for many sharks) for long periods of time to surf, windsurf, boogie-board, kayak and dive.

The number of worldwide shark attacks overall increased from 63 in 2006 to 71 in 2007, continuing a gradual upswing over the past four years, Burgess said.

There have been five unprovoked shark attacks so far this year (most shark attacks are unprovoked), Burgess said. However, the death of Markus Groh, 49, an Austrian lawyer, on Monday is under investigation and might be classified as provoked as he was part of an uncaged tourist dive off the Bahamas where chum is thrown into open water.

"There are more people in the water than there ever have been," Burgess told LiveScience. "We can pretty much predict that next year there will be even more attacks. Even if shark populations are declining, which we know they are, even in a local situation if populations have been depleted, there is still a probability of getting an attack."

Sharks are disappearing from the world's oceans due to overfishing, says Julia Baum, a researcher at the Scripps Institute of Oceanography in San Diego. Baum and some of her shark-tracking colleagues made comments to reporters earlier this month at the annual meeting of the American Association for the Advancement of Science in Boston.

Sharks killed one human in 2007, according to the International Shark Attack File, but humans kill an estimated 38 million sharks for their fins each year, Baum said. That's as many sharks as the entire human populations of the 35 largest cities in the United States. Other estimates are nearly double that.

Some nations have banned shark fishing, but the bans are hard to enforce. And it's a free-for-all in international waters, Baum said.

A study Baum conducted at her previous job at Dalhousie University showed all great shark species in the Northwest Atlantic Ocean have declined by more than 50 percent since the early 1970s.

Everyone agrees that the great sharks' numbers are declining, but some experts think Baum's estimates are faulty and the real situation is less dire, Burgess said.

Little is known about deepwater sharks, even after an assessment of them by IUCN-The World Conservation Union, said Colin Simpfendorfer of James Cook University. Almost half of the known species of sharks occur in deep water and they are more vulnerable to fishing than shallow water sharks (the great sharks), he said. Data from two case studies, one in southeastern Australian waters and the other in the northeastern Atlantic Ocean, showed reductions in abundance of about 90 percent in many species of sharks in less than 20 years, Simpfendorfer said.

The scale of the problem of disappearing sharks is global due to shark finning, the process of cutting off a shark's fins and throwing the rest of the animal overboard still alive, leaving it to die, Baum said. Finning makes use of only 2 to 5 percent of the animal, but shark fins are now one of the most highly valued marine commodities. A bowl of shark fin soup can sell for $100, so there is high incentive for fishermen to fin.

The U.S. National Marine Fisheries Service is proposing to effectively close down much of the coastal large shark fisheries, Baum said. "This would be a very positive step forward for shark management in the U.S.," she said.

The European Union has acted to restrict pressure on deepwater sharks, Simpfendorfer said. And white sharks have been listed as vulnerable by the IUCN Red List, said shark researcher Salvador Jorgensen of Stanford University. In the 2008 IUCN Red List, forthcoming later this year, five additional great shark species will be listed in the threatened categories, including the shortfin mako shark and three species of thresher shark, each of which will be listed as vulnerable. The scalloped hammerhead will be listed as globally endangered, Baum said. "Sharks evolved 400 million years ago, and yet we could now lose some species in the next decade, so that would be just the blink of an eye in evolutionary time," Baum said. Sharks are thought to be crucial to the entire marine ecosystem: they are top predators and help to keep smaller sharks and rays from devouring too many scallops, clams and other commercially important species of marine life. You'll live

Meanwhile, if you do suffer a shark bite, your odds of living are greater than 90 percent. The rate of shark-attack fatalities hit an all-time low in 2007 for the past 20 years, Burgess said.

In fact, the trend for shark-bite fatalities in the 20th century is "down, down, down, decade by decade," Burgess said. The reason is better medical care.

As a result of multiple wars in the last century, medicine has learned how to do a much better job of saving people with traumatic injuries, Burgess said. "The whole process from water onto operating table or stitches occurs with greater rapidity and more professionalism," he said.

The real story isn't shark attacks, Burgess said. "The real story is what is happening to skates, sharks and rays on a worldwide basis. We have witnessed, in the last 20 to 30 years, huge declines in these animals worldwide."