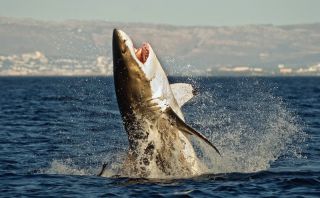 The seventh fatal shark attack in four years struck this past weekend at a surfer's paradise in the Indian Ocean.

Yet teaching people when and where to swim to avoid sharks, and improving the emergency response to shark bites, can significantly reduce the number of deaths due to shark attacks, according to shark-attack statistics.

The 13-year-old boy killed this past weekend was surfing in an off-limits area at La Reunion Island, located east of Madagascar, according to news reports. The shark tore off both of his legs and bit through his stomach. In an attempt to get rid of the deadly shark, officials caught and killed an 11.4-foot-long (3.5 meters) tiger shark later that day, but it turned out not to be the same shark, the reports said.

The La Reunion government has banned swimming, surfing and other water sports in the ocean there, except in protected areas, to prevent shark attacks. There have been 16 shark attacks and seven deaths since 2011 off La Reunion Island. The ban was enacted after a shark killed a 15-year-old girl in 2013. [See Stunning Photos of Great White Sharks]

Despite shrinking shark populations, the number of shark attacks on humans worldwide continues to grow each decade, according to the International Shark Attack File at the University of Florida (UF). More people are enjoying the beach every year, and globalization means formerly isolated islands — such as La Reunion — are welcoming new visitors who don't know where sharks congregate. The lush tropical island, an overseas department of France, has seen a sharp increase in shark attacks following a tourism boom that started in the 1990s.

"One of the problems at places like La Reunion, and any number of insular places that are opening to tourism, is that tourists are not getting the information that the locals have about where the dangerous places are," said shark biologist George Burgess, curator of the world shark attack data at UF's Florida Museum of Natural History. "Either they're not asking, or they're not being told."

For example, an investment in outreach and medical infrastructure has paid off in the United States, home to two-thirds of all shark attacks every year. On average, just one person dies from a shark bite every year in the United States, compared with the worldwide average of six shark-attack deaths each year. And there were no shark-related fatalities in the United States during 2014, though there were 52 shark attacks in the country, according to the International Shark Attack File. Worldwide, there were 72 unprovoked shark attacks on humans, three of which ended in human deaths. (This includes the U.S. numbers.) Examples of provoked attacks include a fisherman wearing his bloody catch or someone harassing a shark.

In the United States, lifeguards stop swimmers and surfers from entering the water when sharks are present. Lifeguards also receive medical training to help stop bleeding linked to shark bites, and people who are injured can be quickly transported to a nearby hospital.

But the same techniques may be hard to recreate in a remote tropical paradise. So here's how to avoid sharks.

Watch out for sharks

The species that tend to attack humans are the same worldwide: tiger sharks, bull sharks and great white sharks. [On the Brink: A Gallery of Wild Sharks]

Their attacks come in three forms:

The hit and run: In shallow water, a shark grabs a human like it grabs for fish. This often happens in rough surf, strong currents or murky water. The shark grabs, realizes its mistake, lets go and leaves. People are usually bitten only once, on the legs or feet, but even one bite can inflict terrible blood loss.

The bump and bite: A shark bumps a swimmer or surfer with its head or body before biting. This kind of attack often involves more than one bite, causing serious injuries or death.

The sneak attack: Sharks hunt by stealth and surprise because seals and fish are fast and nimble, able to outswim a shark. They rush toward their prey, grab hold and injure the creature before it can escape. If the prey is human, this grab-and-smash attack can be deadly.

If a shark actually bites you, hit it on the nose, or claw at its eyes or gills, Burgess advises. This is one predator that respects a powerful counterattack. For more on what to do during a shark attack, visit the Florida Museum of Natural History.

And remember, every year, jellyfish kill more people than sharks. So does lightning. And humans kill many, many more sharks than the other way around. About 100 million sharks die at human hands each year, about 70 percent of them for their fins, according to the United Nations' Food and Agriculture Organization. More than 180 species of sharks and rays are listed by the International Union for Conservation of Nature as threatened with extinction.