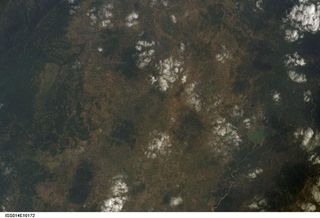 The mystery of whether or not giant plumes of hot rock from near Earth's core force volcanic island chains to form could soon be solved with the largest campaign ever to map such jets of magma beneath the Earth's surface.

Volcanoes are typically found near the borders of tectonic plates, born as these plates either violently push or pull at each other. Strangely, volcanoes sometimes erupt far away from these boundaries in the middle of these plates. The sources of these outbursts might be mantle plumes, streamsof molten rock rising up from deep in the Earth to penetrate overlying material like a blowtorch. As the Earth's surface drifts over such plumes, geologists think chains of volcanic isles, such as the Hawaiian Islands, emerge.

However, more than 40 years after mantle plumes were first proposed, scientists are debating whether they actually exist. For example, it remains hotly debated whether and how mantle plumes can remain active and stationary for more than 100 million years.

To help resolve the controversy, a French-German project now aims to image a plume that may have played a role in the extinction of the dinosaurs.

The scientists have deployed nearly 60 seismometers in the Indian Ocean over a vast area of seafloor of more than 1.1 million square miles (3 million square kilometers) around Réunion Island, one of the most active volcanoes in the world. The seabed the devices rest on can vary from 7,500 feet (2,300 meters) to 18,000 feet (5,500 m) below the ocean's surface.

The seafloor devices join about 60 other seismometers on islands in the Indian Ocean, such as Réunion, Mauritius, Madagascar and the Seychelles. These land-based stations reduce the need for expensive sensors on the ocean bottom, researchers explained. [Infographic: Tallest Mountain to Deepest Ocean Trench]

"We are starting from a stage where almost nothing is known of the deep mantle structure beneath La Réunion and beneath the whole Indian Ocean region," researcher Guilhem Barruol, a seismologist at the University of La Réunion, told OurAmazingPlanet. "It's indeed exciting to take part of this deep Earth exploration."

Lurking beneath the surface

The plume that may lurk under Réunion is suspected to have seared a track of volcanic activity that stretches about 3,400 miles (5,500 km) northward from Réunion to the Deccan Plateau region of what is now India. At the end of the Age of Dinosaurs about 65 million years ago, massive volcanism in the Deccan area spewed lava across 580,000 square miles (1.5 million square km), radically altering Earth's climate and perhaps hastening the giant reptiles'demise.

The Réunion Hotspot and Upper Mantle-Réunions Unterer Mantel (RHUM-RUM) project aims to image the crust and mantle under Réunion at all depths for the biggest plume hunt so far. The network of ocean floor sensors will illuminate structures under the island down to about 600 miles (1,000 km) below the Earth's surface, while the land-based seismometers will image the area below that all the way to the boundary of the core and mantle. Coincidentally, two other seismological experiments are deploying 50 more seismic stations in Madagascar, data that, along with recent seismic-scanning initiatives such as AfricaArray, should help boost imaging of the mantle layer under Réunion.

The stems of mantle plumes are challenging to image because they may be 60 to 300 miles (100 to 500 km) or so wide, similar to the wavelengths of the seismic waves used to scan them. Using state-of-the-art techniques, such as methods that account for how seismic waves scatter around narrow conduits of magma, the researchers hope to pin down the existence and location of any plume that might exist, as well as how it might erode or spread under overlying rock.

Scientists think heat rising from oceanic mantle plumes may channel heat to nearby midocean ridges. Such flow channels might explain a series of anomalies near Réunion, such as volcanism on Rodrigues Island. RHUM-RUM will analyze Rodrigues Ridge to help confirm or refute this idea — the most recent volcanism on Rodrigues Island dates back 1.5 million years, so any flow channel should still be operating and will hopefully become the first to be clearly imaged, researchers said.

The researchers hope to provide insights "on the presence, or absence, of a deep mantle plume beneath a long-lived hotspot such as La Réunion and therefore bringing answers to important questions," Barruol said. "Is a rising plume present beneath the volcano? Is it continuous? Does it originate from the upper mantle? From the transition zone? From the lower mantle? From the core-mantle boundary as proposed [in] the plume models?"

The seafloor seismometers will analyze the Earth for about 13 months before the buoyant part of each machine detaches and rises, with all its data, back to the surface. Early results from RHUM-RUM are expected in 2015. Barruol and his colleague Karin Sigloch at Ludwig Maximilian University of Munich detailed their work to date in the June 4 issue of Eos, a trade publication of the American Geophysical Union.