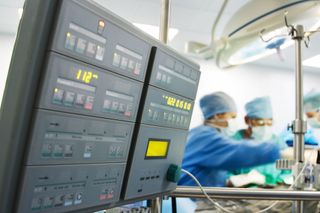 Question: I've heard the term "shock" a million times, but I realized that I don't really know what it means. What is shock?

Answer: Shock is a condition in which blood pressure is too low and not enough oxygenated blood can sustain your body. The medical disorder of shock is not the "shock" that people feel from a sudden traumatic event. In the United States, hospital emergency departments report more than one million cases of shock each year.

If untreated, shock is usually fatal. If shock is treated, the outlook depends on the cause, the other disorders the person has, the presence and severity of any organ failure, the amount of time that passes before treatment begins, and the type of treatment given. Regardless of treatment, the likelihood of death caused by shock is great after a massive heart attack, especially in older people.

It is important to get immediate treatment when shock is diagnosed. If you come upon someone in shock, the first step you should take is to call 911 for emergency medical assistance.

Any bleeding should be stopped. Then the victim should be laid down and kept warm. Raise the person's legs about one to two feet to get the blood returning to the heart. Breathing should be checked. The head should be turned to the side to prevent inhalation of vomit. Nothing should be given by mouth.

When the emergency medical technicians (EMTs) arrive, they may give oxygen through a face mask or provide a mechanical device to assist breathing. They may also give large volumes of fluids intravenously to raise blood pressure. A blood transfusion may be given.

Drugs that constrict the blood vessels may be administered to boost blood flow to the brain or heart. A bacterial infection could be treated with antibiotics. A drug such as atropine may be used to increase a slow heart rate, and other drugs may be given to improve the ability of the heart muscle to contract.

If you would like to read more columns, you can order a copy of "How to be a Healthy Geezer" at http://www.healthygeezer.com.