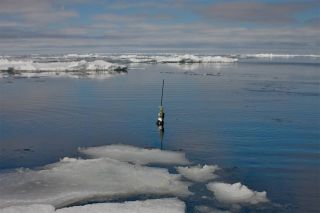 Ocean temperature must be measured regularly around the world from the ocean surface to the ocean floor to reduce uncertainty in ocean heat uptake, which accounts for over 90% of global warming. Extending the Argo project (an array of 3,500 free-drifting floats that measure temperature and salinity to 2 km, one of which is shown here) to full depth would fill this need.
(Image: © Argo Project.)

Sarah Purkey is a Ph.D. student in the University of Washington's School of Oceanography. Gregory Johnson is an oceanographer with the National Oceanic and Atmospheric Administration (NOAA) Pacific Marine Environmental Laboratory. They contributed this article to LiveScience's Expert Voices: Op-Ed & Insights.

The oceans are the flywheel of the climate system. As atmospheric concentrations of greenhouse gases increase, the Earth system is warming, and over 90 percent of that increase in heat goes into the ocean. Knowing how much heat the ocean absorbs is vital to understanding sea level rise (the oceans expand as they warm), and predicting how much, and how fast, the atmosphere will warm.

Most estimates of ocean warming have been limited to the upper 700 meters of water, owing to the limited availability of ocean-temperature data below that depth. Since about the turn of the millennium, the Argo array, an international system of robotic profiling floats, has massively increased ocean sampling to 2,000 meters, and allowed scientists to show conclusively that ocean warming extends below 700 meters.

However, the ocean is also warming near the bottom, in the coldest waters of the abyssal zones. Oceanographers measure the abyssal ocean to depths of 6,000 meters by lowering accurate recording thermometers and other instruments to the ocean floor on long cables from research vessels. During the 1980s and 1990s, an international program called the World Ocean Circulation Experiment collected thousands of such profiles around the globe.

During the 2000s, we and our fellow oceanographers returned and re-measured ocean properties at many of those sites. We detected a consistent warming signal in the abyssal ocean around the globe. The strongest warming is occurring in the Southern Ocean, around Antarctica, at a rate of approximately 0.03 degrees Celsius per decade. [Warming in Deep Southern Ocean Linked to Sea-Level Rise]

Further north, abyssal ocean waters are also warming, but at a rate of about one tenth of what we see in the deep Southern Ocean. Even though the temperature increases are small, because they are spread over huge ocean basins in layers a few kilometers thick, they quickly add up.

The warming in the deep Southern Ocean alone accounts for 34 terawatts of warming, roughly equivalent to the continuous operation of three 1,500-watt electric teakettles for each of the 7 billion people on the planet. This warming could offset some of a recently reported slowdown in the upper ocean's warming rate.

Unlike the surface ocean, which is in contact with the warming atmosphere, these abyssal waters are thousands of meters below the surface. How can they be warming? To understand this one must learn a bit about the deep ocean circulation.

In a few locations at high latitudes, surface water becomes dense enough to sink rapidly to the bottom of the ocean, allowing communication between the atmosphere and the abyss. The sinking occurs in several locations around Antarctica where large, shallow continental shelves are mostly covered by ice. Through a complex interplay among the ocean, ice shelves, and atmosphere, very cold, dense water builds up on the continental shelves and eventually spills over their edges, mixing with surrounding water and sinking to the sea floor.

That cold, dense water slowly spreads north, filling the deep Southern Ocean and the abyssal regions of most ocean basins. As it travels north, the abyssal water slowly warms from geothermal heating below and as a result of mixing with warmer waters above, ultimately becoming less dense. Thus, it gradually rises, returning south at a shallower depth. That return flow completes a circulation path that is known as a meridional overturning circulation, or MOC.

Scientists have observed warming all along the bottom limb of the Southern MOC. It could be that a smaller amount of cold, dense water is sinking to the bottom around Antarctica. If the other processes that warm abyssal waters (mixing and geothermal heating) have not changed, then this change could explain the abyssal ocean warming that we are observing.

What is causing the hypothesized decrease in sinking of waters around Antarctica? This is still an open question, but some researchers have suggested that this decrease could be caused by recent increases in the rate of melting glaciers in West Antarctica. The increased freshwater input is causing the shelf waters to freshen there and thus get lighter, perhaps inhibiting sinking. Indeed, the waters sinking in this region have been freshening, as well, in recent decades, supporting this suggestion.

Deep ocean data are relatively sparse, and research ships used to collect them are increasingly expensive to operate. The Argo array of robotic floats has revolutionized oceanography since it started in 2000, but these floats only sample the upper half of the ocean volume. We now know the bottom half is also playing important roles in our changing climate. To move one step closer to understanding Earth's perturbed energy budget, we need a full depth, global ocean observation system – a deep Argo.