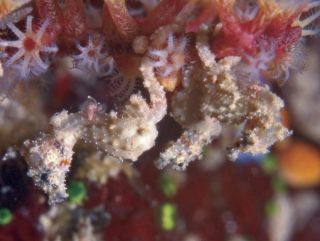 Among this year's top 10 picks is a tiny seahorse -- Hippocampus satomiae -- with a standard length of 0.54" (13.8 mm) and an approximate height of 0.45" (11.5 mm). This pygmy species was found near Derawan Island off Kalimantan, Indonesia. The top 10 list of new species is announced annually by the International Institute for Species Exploration at Arizona State University.
(Image: © John Sear)

A pea-sized seahorse, caffeine-free coffee and bacteria that live in hairspray are among the "top 10" species described in 2008, a group of scientists announced today.

The top 10 new species also include the very tiny (a snake just a slither longer than 4 inches or 104 millimeters), the very long (an insect from Malaysia with an overall length of 22.3 inches or 56.7 centimeters), the very old (a fossilized specimen of the oldest known live-bearing vertebrate) and the very twisted (a snail whose shell twists around four axes). Rounding out this year's list are a palm that flowers itself to death, a ghost slug from Wales and a deep blue damselfish.

The species were announced by the International Institute for Species Exploration at Arizona State University and an international committee of taxonomists.

The taxonomists also are issuing an SOS — State of Observed Species — report card on human knowledge of Earth's species. In it, they report that 18,516 species new to science were discovered and described in 2007.

Details on the organisms

Among this year's top 10 picks is a tiny seahorse – Hippocampus satomiae – with a standard length of 0.54 inches (13.8 millimeters) and an approximate height of 0.45 inches (11.5 millimeters). This pygmy species was found near Derawan Island off Kalimantan, Indonesia. The name — satomiae — is "in honour of Miss Satomi Onishi, the dive guide who collected the type specimens."

From the plant kingdom is a gigantic new species and genus of palm – Tahina spectablilis – with fewer than 100 individuals found only in a small area of northwestern Madagascar. This plant flowers itself to death, producing a huge, spectacular terminal inflorescence with countless flowers. After fruiting, the palm dies and collapses. Soon after the original publication of the species description, seeds were disseminated throughout the palm grower community, to raise money for its conservation by the local villagers. It has since become a highly prized ornamental.

Also on the top 10 list is caffeine-free coffee from Cameroon. Coffea charrieriana is the first record of a caffeine-free species from Central Africa. The plant is named for Professor André Charrier, "who managed coffee breeding research and collecting missions at IRD (Institut de Recherche pour le Développement) during the last 30 years of the 20th century."

And, in the category of "spray on new species" is an extremophile bacteria that was discovered in hairspray by Japanese scientists. The species — Microbacterium hatanonis — was named in honor of Kazunori Hatano, "for his contribution to the understanding of the genus Microbacterium."

Phobaeticus chani made the list as the world's longest insect with a body length of 14 inches (36.6 centimeters) and overall length of 22.3 inches (56.7 centimeters). The insect, which resembles a stick, was found in Borneo, Malaysia.

The Barbados Threadsnake — Leptotyphlops carlae — measuring 4.1 inches (104 millimeters) is believed to be the world's smallest snake. It was discovered in St. Joseph Parish, Barbados.

The ghost slug — Selenochlamys ysbryda — was a surprising find in the well-collected and densely populated area of Cardiff, Glamorgan, Wales.

A snail — Opisthostoma vermiculum — found in Malaysia, represents a unique morphological evolution, with a shell that twists around four axes. It is endemic to a unique limestone hill habitat in Malaysia.

The other two species on the top 10 list are fish – one found in deep-reef habitat off the coast of Ngemelis Island, Palau, and the other a fossilized specimen of the oldest known live-bearing vertebrate.

Chromis abyssus — a beautiful species of damselfish made it to the top 10 representing the first taxonomic act of 2008 and the first act registered in the newly launched taxonomic database Zoobank. As a result, in the first month following its original description, it was the most downloaded article in Zootaxa's history and was among the top 10 downloaded articles for 11 months in 2008. The discovery also highlights how little is known about deep-reef biodiversity.

Also on the top 10 list is a fossilized specimen — Materpiscis attenboroughi — the oldest known vertebrate to be viviparous (live bearing). The specimen, an extremely rare find from Western Australia, shows a mother fish giving birth approximately 380 million years ago. The holotype specimen has been nicknamed "Josie" by the discoverer, John Long, in honor of his mother.

Charting the species of the world and their unique attributes are essential parts of understanding the history of life, says Quentin Wheeler, an entomologist and director of the International Institute for Species Exploration at Arizona State University. "It is in our own self-interest as we face the challenges of living on a rapidly changing planet," he said.

A new generation of tools are coming online, he said, that will vastly accelerate the rate at which we are able to discover and describe species.

"Most people do not realize just how incomplete our knowledge of Earth's species is or the steady rate at which taxonomists are exploring that diversity. We are surrounded by such an exuberance of species diversity that we too often take it for granted," Wheeler said.

There are an estimated 1.8 million species that have been described since Linnaeus initiated the modern systems for naming plants and animals in the 18th century. Scientists estimate there are between 2 million and 100 million species on Earth, though most set the number closer to 10 million.

An international committee of experts, chaired by Janine N. Caira of the University of Connecticut, selected the top 10 new species for this year's list. Nominations were invited through the species.asu.edu Web site and also generated by institute staff and committee members.

The Caira committee had complete freedom in making its choices and developing its own criteria, from unique attributes or surprising facts about the species to peculiar names, Wheeler said.