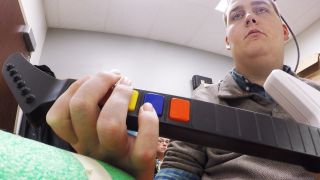 Ian Burkhart, who was paralyzed in an accident, is able to use his hand and play "Guitar Hero" thanks to a device that decodes signals in his brain and sends them to the muscles on his forearm.
(Image: © Ohio State University Wexner Medical Center/ Batelle)

A 24-year-old man whose arms and legs were paralyzed by a spinal cord injury has regained the ability to move his hand, wrist and several fingers using an electrical device in a lab, according to a new study.

The device is implanted in his brain and connected to a sleeve of electrodes worn on his forearm. With the device's help, the man, Ian Burkhart, can now carry out day-to-day tasks with his own hand, including pouring water into a glass, swiping a credit card and even playing "Guitar Hero."

Burkhart became paralyzed at age 19 after he dove into a shallow wave at a beach and hit the sandy bottom, severely injuring his spinal cord. Because of where on his body the injury occurred, he lost the use of his legs and his forearms. [5 Crazy Technologies That Are Revolutionizing Biotech]

But now, using the device, Burkhart has regained functional movements, said Chad Bouton, the division leader of neurotechnology and analytics at the Feinstein Institute for Medical Research in New York. Bouton is also the lead author of the study describing Burkhart's progress, published today (April 13) in the journal Nature.

Functional movements are the kind that let people carry out everyday activities, such as picking up a bottle and pouring water into a cup, but these movements are often taken for granted, Bouton added, speaking on April 12 at a news conference announcing the results of the study.

Burkhart is able to move his arm using brain-computer-interface technology, which uses a computer to translate signals in a person's brain into electrical pulses — in this case, on the sleeve Burkhart wears on his forearm.

To create this technology, the researchers implanted a device with microelectrodes into Burkhart's motor cortex, the part of the brain that controls movement.

Now, when he wears the sleeve, its 130 electrodes deliver electrical impulses to his muscles, causing them to contract.

In a nonparalyzed person, signals from the brain travel down the spinal cord to nerves connected to various muscles in the body, making those muscles move. In people who are paralyzed, these signals still occur in the brain, but they cannot be transmitted to muscles, because the spinal cord is damaged. The implant in Burkhart's brain and the electrode sleeve bypass the injury in his spinal cord, delivering the signals directly to his muscles.

Essentially, Burkhart is able to carry out these movements by "mastering his thoughts," said Dr. Ali Rezai, the senior author of the study and a neurosurgeon at The Ohio State University Wexner Medical Center, where Burkhart was treated.

Burkhart's ability to move some of his fingers is a major finding, the researchers said, adding that they weren't sure it would be possible.

To help Burkhart regain his individual finger movements, the researchers had to find and decipher very specific brain signals, Bouton said. Then, they had to figure out the pattern of electrical impulses they would need to deliver to the forearm, he said. The muscles in the forearm that control finger movements lie beneath other muscles, which control wrist movements, he said. [Bionic Humans: Top 10 Technologies]

This isn't the first time researchers have decoded brain signals to help a paralyzed individual move.

Indeed, the new technology is similar to using a brain implant to control a robotic arm or an exoskeleton, Rezai said. But in Burkhart's case, the sleeve takes things one step further, by actually allowing him to move his own limb, Rezai said.

The ultimate goal is a device that is minimally invasive and simple to use, Rezai said.

Another important aspect of Burkhart's electrode sleeve is that it's intuitive, said Nick Annetta, a research scientist at Battelle Memorial Institute, a research and development organization in Ohio, and an author of the study.

That means that "when [Burkhart] thinks about closing his hand, he closes his hand. He doesn't have to think about other types of movements" in order to make that movement, Annetta said. The technology is "as natural as possible," he said.

The doctors and researchers hope that one day this technology could help not only people with paralysis, but also those who have lost movement due to strokes or traumatic brain injuries, Annetta said.