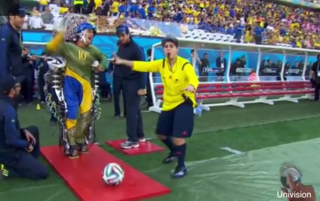 The honor of first kick of the 2014 FIFA World Cup went not to Brazilian soccer star Neymar, but to 29-year-old Juliano Pinto, who is paralyzed from the waist down.

In a much-hyped demonstration at the tournament's opening ceremony yesterday (June 12) at the Corinthians Arena in Sao Paulo, Brazil, Pinto made the kick while wearing a robotic exoskeleton controlled by his brain. But those viewing it at home got only a brief glimpse of Pinto performing the ceremonial kick before the cameras rolled back to singer Jennifer Lopez and the day's other entertainers.

The high-tech demonstration was masterminded by Duke University neuroscientist Miguel Nicolelis, as part of the Walk Again Project, an international nonprofit initiative that aims to develop and implement a brain-machine interface to allow severely paralyzed patients to regain mobility. The project is a collaboration between researchers at Duke University, the Swiss Federal Institute of Technology and the Lily Safra International Institute of Neuroscience of Natal in Brazil. [Stunning Soccer: The World Cup 2014 from Space (Photos)]

"The World Cup is the world's largest sports competition, the ultimate sharing opportunity," Nicolelis told CBS News earlier this year. "We proposed to the government that instead of a regular musical or typical opening ceremony that has been done in the past, we could surprise the world by doing a scientific demonstration instead."

In addition to showcasing the futuristic brain-controlled technology, Nicolelis hoped the demonstration would inspire the next generation of innovators.

"Sports can be a huge avenue to reach out to people that would never actually pay attention to science news," Nicolelis said, according to CBS News. "I always wanted to show kids in Brazil how important science can be for society."

During yesterday's opening ceremony, Pinto controlled the exoskeleton using EEG (electroencephalogram) signals recorded from his scalp, which were decoded by a computer worn inside a backpack and converted into simple commands to move the mechanical suit. Artificial skin on the soles of the suit's feet relayed sensory information to Pinto through his arms, Nicolelis' team said.

It's not the first time brain signals have been used to control an exoskeleton, however. Similar types of robotic suits have been used in hospital settings as training devices for patients with spinal cord injuries. But for many paralyzed people, the successful World Cup demonstration does provide hope that one day such technology may help them walk (or kick) again.