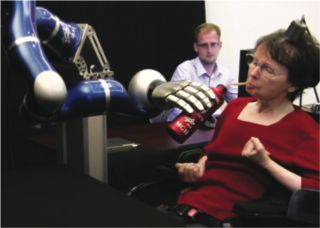 In April 2011, a paralyzed woman named Cathy Hutchinson lifted a cup for the first time in nearly 15 years, using a robotic arm controlled by her thoughts.

Hutchinson was paralyzed when she suffered a stroke that damaged her brain, cutting her motor functions off from the rest of her body. She was left unable to speak or move. For her and other tetraplegics — people who have lost the use of their arms and legs — hundreds of small tasks are beyond their reach. Amputees run into similar problems, as they currently have to use ungainly prosthetics.

A project called BrainGate2 might get us closer to the day when prosthetic or robotic arms could give people their limbs back. It's the first clinical trial of a brain-controlled robotic limb in humans, according to John Donoghue, a neuroscientist at Brown University and the Department of Veterans Affairs. Donoghue is one of the lead investigators in the trial, whose results are being published in this week’s issue of the journal Nature.

"The No. 1 desire of many patients is getting back the arm movement," Donoghue said.

The BrainGate project is a collaboration between the Department of Veterans Affairs, Brown University, Massachusetts General Hospital, Harvard Medical School and the German Aerospace Center (DLR), which designed the robot arm.

Some newer prosthetics use minute motions from the stump of an arm, while others reroute nerve endings. And there is ongoing research into noninvasive methods of reading brain impulses. Some success with implants has been reported in monkeys, and for people who cannot walk, there are exoskeletons.

The BrainGate, however, is connected directly to the human motor cortex, a stretch of cerebral real estate that runs in a strip from the top of the head toward the cheekbone. A tiny array of 96 electrodes is attached to the part of the motor cortex that controls the arm. Those electrodes send signals through a cable to a computer. The computer decodes the signal into specific movements executed by the robot arm.

The system isn't yet practical for everyday use — a cable is attached to the patient's head and the computer that processes the signals is still the size of a dorm room refrigerator. Donoghue said the goal is to shrink the processing computer enough so that it is implantable, or at least wearable.

Another goal is giving the electrodes wireless connectivity, and creating a power source that can last for years, similar to that of a pacemaker. Eventually, Donoghue and his colleagues also want to build a robotic arm that can be attached like a prosthetic for people who have lost limbs.

There are still areas that need to be perfected, such as the controls for the interface. When Hutchinson directed the arm to lift the cup of coffee, she didn't have to direct every movement, only the lateral and grasping motion.

Leigh Hochberg, the lead author on the Nature paper, said during a press conference that one of the questions was, "how much of the smarts of the system do you build into the arm?"

Hochberg, a neuroengineer and critical care neurologist, noted that in natural movement, one doesn't think about every individual motion; much of it is unconscious. In this case, the scientists wanted to accomplish something similar.

Hutchinson is one of two participants in a trial administered by Massachusetts General Hospital. (The other participant is a man identified as Robert, who was also paralyzed by a stroke). Both reported that moving the robotic arms wasn't difficult to do, and didn't require much more concentration than using one's "natural" arms, though using the machine did require some training.

The BrainGate project had its first success with humans in 2006, when a patient named Matt Nagle, who was paralyzed after being stabbed, was able to demonstrate controlling a computer's mouse cursor using the first iteration of the BrainGate system.

Donoghue and Hochberg said it will still be years before this device is available to patients and is affordable – it must still be approved by the Food and Drug Administration.