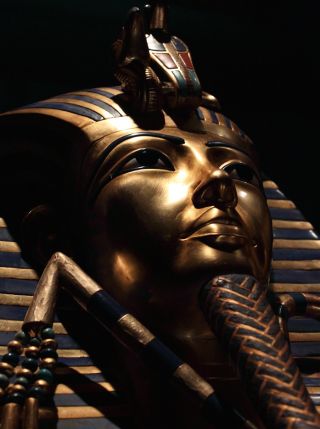 Tutankhamun was an Egyptian pharaoh who was buried in a lavish tomb filled with gold artifacts in the Valley of the Kings. His tomb, given the modern-day name "KV 62," was discovered in 1922 by an archaeological team led by British Egyptologist Howard Carter.

The tomb was mostly intact, an extraordinary find given that most of the tombs in the Valley of the Kings had been looted in ancient times.

But while Tutankhamun's tomb was lavish, historical and archaeological evidence indicates that the young pharaoh was sickly and spent his short rule trying to undo a religious revolution that his father had started.

Son of a revolutionary

Tutankhaten (as he was called at birth) was born around the year 1341 B.C. His father was the pharaoh Akhenaten, a revolutionary pharaoh who tried to focus Egypt's polytheistic religion around the worship of the sun disc, the Aten. In his fervor, Akhenaten ordered the names and images of other Egyptian deities to be destroyed or defaced.

Tutankhaten's biological mother is unknown but likely was not Akhenaten's principal wife, Queen Nefertiti, although debate about this still remains. As an infant, Tutankhamun was wet-nursed by his half-sister, Meritaten. A family portrait, painted in a tomb at the ancient city of Amarna, shows Meritaten nursing her infant brother.

Tutankhamun ascended to the throne around 1332 B.C., when he was about 9 years old. Given his young age he would have relied heavily on his advisers. At some point his name was changed to Tutankhamun, removing the word "aten" — a reminder of his father’s religious revolution — from his name.

Tutankhamun also condemned his father's actions in a stela found at Karnak, saying that Akhenaten's religious revolution caused the gods to ignore Egypt. Part of the stela reads "the temples and the cities of the gods and the goddesses, starting from Elephantine [as far] as the Delta marshes … were fallen into decay and their shrines were fallen into ruin, having become mere mounds overgrown with grass … The gods were ignoring this land…" [From "The City of Akhenaten and Nefertiti," by Barry Kemp]

Archaeological evidence indicates that Tutankhamun suffered from ill health. A study of his remains published in 2010 found that he suffered from a variety of maladies, including malaria and Kohler disease (a rare bone disorder of the foot). A number of canes have been found in Tutankhamun's tomb, finds that support the idea that the pharaoh had difficulty walking at times.

It's not known what killed Tutankhamun. There have been numerous hypotheses put forward over the years. It's been suggested that he died from an infection caused by a broken leg or from injuries suffered in a chariot accident.

It's also been speculated that Tutankhamun suffered from Marfan syndrome, a genetic disorder that can leave someone with unusually long fingers, arms and legs. Members of the royal family were depicted with these features during Akhenaten's reign. However, the 2010 study found that Tutankhamun probably did not have this condition.

Tutankhamun was married to his half-sister, Queen Ankhesenamun, and the couple had twin daughters who were stillborn. Their fetuses were buried in jars in the pharaoh’s tomb. The couple left no heir to the throne.

The boy king died in 1323 B.C. around the age of 18. His death was unexpected, and his tomb appears to have been finished quickly.

Recent research suggests that returning Egypt to its traditional polytheistic beliefs was so important to Tutankhamun (and his advisers) that he had himself mummified in an unusual way to emphasize his strong association with Osiris, the god of the underworld.

Archaeologist Salima Ikram wrote that Tutankhamun's skin was soaked black with oil, his heart was removed and his penis was mummified at a 90-degree angle. In legend Osiris had black skin, strong regenerative powers and a heart that had been hacked to pieces by this brother Seth.

Research shows that Tutankhamun's tomb was prepared in a hurry. Microbes found on the wall of the tomb indicate that the paint on the wall wasn't even dry when the tomb was sealed.

Howard Carter's team discovered the tomb's entranceway on November 4, 1922, and on November 26 they got inside.

"As one's eyes became accustomed to the glimmer of light the interior of the chamber gradually loomed before one, with its strange and wonderful medley of extraordinary and beautiful objects heaped upon one another," Carter wrote in his dig diary.

Carter couldn't even begin to describe the treasures that his team had found. "Our sensations and astonishment are difficult to describe as the better light revealed to us the marvellous collection of treasures: two strange ebony-black effigies of a King, gold sandalled, bearing staff and mace, loomed out from the cloak of darkness; gilded couches in strange forms, lion-headed, Hathor-headed, and beast infernal …"

The discovery of the boy king's tomb caused a media sensation spurred on by a myth that the opening of Tutankhamun's tomb awakened a curse that killed those who helped find it.

While the treasures were incredible, the tomb was unusually small for a pharaoh's burial, containing only 110 square meters (1,184 square feet) of floor space. This space is divided among the passage corridor, burial chamber, antechamber and two rooms now called the "annex" and the "treasury."

The tomb's small size may have been because the pharaoh died young and unexpectedly and there wasn't time to carve out a larger tomb. Another hypothesis is that the tomb has two undiscovered chambers that were walled over when the boy king was buried and these chambers hold a second, so far undiscovered, burial.

A tomb within a tomb?

Nicholas Reeves, a professor at the University of Arizona, has found evidence that some of Tutankhamun's burial goods were re-used from Queen Nefertiti's tomb. The gold death mask the boy-king wore may have originally been made for Nefertiti. Reeves also has found artifacts that had Nefertiti's name carefully erased and Tutankhamun's inserted.

Reeves has further argued that Tutankhamun ended up being buried in a tomb that was originally meant for Queen Nefertiti and that when Tutankhamun died, the doorway to Nefertiti's tomb was walled over and Tutankhamun's tomb was constructed in a hurry.

Radar tests are being conducted to determine whether Reeves' theory is correct. So far the tests have found possible open spaces behind the north and west walls of Tutankhamun's burial chamber. Whether the tomb of Nefertiti lies in one of the openings is unknown. It is possible that the radar is detecting natural features rather than a tomb.

In fact, radar experts not affiliated with the project have disputed the results of those scans, noting that information gained from scans in the Valley of the Kings can be tricky to interpret. That's because the sediments contain natural voids and rock inclusions that mask themselves as archaeological remains.

More doubt was cast over the results on April 1, 2016, when Egypt's new minster of antiquities, Khaled El Anany, sounded caution over interpreting radar scan results as evidence that such hidden chambers do exist in the tomb.

"We are not looking for hidden chambers but for the reality of the truth," El-Anany said. "We are very keen to follow the scientific procedures," he said. New scans using a different radar technique will be conducted in late April, followed by an international conference to discuss those results in May, he added.