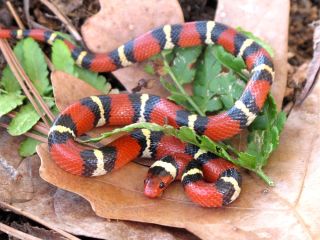 Kingsnakes are medium-size nonvenomous snakes that kill by constriction. They are one of the most common snakes in North America. They are called kingsnakes because they sometimes eat other snakes, as does the king cobra. Kingsnakes are popular among pet owners. Milk snakes are a type of kingsnake.

In recent years, the classification of kingsnakes has been shaken up somewhat. Alan Savitzky, a professor of biological sciences at Utah State University and snake biology specialist, credits the upheaval to advances in molecular evolutionary studies. Whereas scientists used to determine species and subspecies classifications by examining whether snakes could interbreed and produce fertile offspring, they can now analyze DNA to determine how closely related snakes are. With that data, scientists can now classify snakes into groups by looking at if they share an evolutionary path.

Because of these new data collection methods, a team of researchers in argued in a 2009 paper published in the journal Zootaxa that several snakes that are classified as subspecies of the common kingsnake (Lampropeltis getula) — black kingsnakes, eastern kingsnakes, speckled kingsnakes, Sonora kingsnakes and California kingsnakes — should be considered separate species, said Savitzky. He also noted that a 2013 paper in the journal Systematic Biology posited that the scarlet kingsnake, previously considered a milk snake, is actually its own species. Some publications have adopted the proposal; others still refer to these snakes as subspecies of kingsnake.

Most species of kingsnake have vibrant patterns on their skins with vivid contrasting colors. The patterns, especially bands and speckles, break up the snake's body outline so it is less visible to predators like birds of prey, mammals like foxes and coyotes and other snakes, according to the San Diego Zoo.

Their coloring can be understood by their geographic location, according to Savitzky. For example, the farther west one goes in the eastern kingsnake's range, the more the snakes' coloring resembles the black kingsnake, which lives in Tennessee.

The following is a description of some common kingsnake species' appearances and ranges.

These creatures are sometimes called "chain snakes" or "chain kings" because their distinctive markings can resemble a chain linked across their bodies, said Savitzky. They have shiny black scales with white or yellowish chain-like bands that cross their backs and connect on the sides. According to the Savannah River Ecology Laboratory, eastern kingsnakes on the coast generally have wide bands while those in the eastern mountains have very thin bands. They may be nearly black.

Eastern kingsnakes are found from southern New Jersey to north Florida and west to the Appalachians and southeastern Alabama, according to the Smithsonian National Zoological Park.

The nearly black eastern kingsnakes in the Appalachians give way to the black kingsnake species in mountains of Tennessee. These snakes average 4 to 5 feet (1.2 to 1.5 m) in length and range from southern Ohio and western West Virginia to southeastern Illinois and south to northeastern Mississippi and northwestern Georgia, according to Outdoor Alabama, the website of the Alabama Department of Conservation and Natural Resources.

Moving farther west, one sees the faint spots of the black kingsnake grow into the full, vibrant markings of the speckled kingsnake. This colorful snake has a yellow or white speckle on every single scale, said Savitzky. Scales are black or brownish in color. The size of the speckles can be evenly distributed, leading to the nickname "salt and pepper snake" or can be denser in certain areas, creating a banded look.

Speckled kingsnakes are found in the middle of the United States, ranging from Illinois to Iowa and south to Alabama and Texas, according to the Cincinnati Zoo.

This is a relatively small species of kingsnake, generally growing to between 2.5 and 4 feet (0.7 to 1.2 m), according to the Rosamond Gifford Zoo. California kingsnakes have shiny black scales with bright white markings. Most California kingsnakes have white bands, but some populations have longitudinal stripes going from their heads to their tails. Those populations are usually in Southern California. Both color patterns can appear in the same clutch of eggs, said Savitzky.

California kingsnakes live everywhere in the Golden State except the rainy redwood forests. They're also found in dryer parts of Oregon, as far west as Colorado and south into Mexico, according to the Rosamond Gifford Zoo.

These are small snakes, averaging 1 to 2 feet (0.3 to 0.6 m), according to the Virginia Herpetological Society. They are found from central Virginia to Key West, Florida and west to the Mississippi River. This range overlaps with the dangerous coral snakes', which scarlet kingsnakes mimic, said Savitzky. Like venomous coral snakes, scarlet kingsnakes are red with yellow and black bands that encircle their bodies.

Nonvenomous scarlet kingsnakes evolved to look like venomous species in order to scare predators. "This type of mimicry, where a harmless species mimics a harmful species, is known as Batesian mimicry," said Bill Heyborne, a herpetologist and professor of biology at Southern Utah University.

"In areas of the world where both species exist, there are a variety of rhymes, which have been used to help people distinguish the two. For example, 'Red on yellow kills a fellow. Red on black, friend of Jack,'" said Heyborne. While Batesian mimicry may be helpful in keeping predators away, it can cause problems for scarlet kingsnakes. Humans often kill them thinking they are dangerous.

Across their various ranges, kingsnakes find similar habitats to live in. They live in forests, grasslands, suburbia, and rocky areas in fields and deserts. Snakes in wetter areas, such as the eastern and southern United States spend more time around swamps and riverbanks. They are terrestrial, meaning they stay mostly on land rather than venturing into water or trees.

Kingsnakes are less conspicuous than many other snakes, such as rat snakes, Savitzky said. "This is because they are adapted to living undercover, such as under rocks, under logs, and in burrows in the ground."

The habits of these wide-ranging snakes depend somewhat on their location. According to the San Diego Zoo, in most parts of the country, kingsnakes are primarily nocturnal. They are diurnal in places with more moderate climates, like Southern California. For kingsnakes, moderate climates include the southeast, at least in the winter; according to the Savannah River Ecology Laboratory, eastern kingsnakes in Georgia are likely to be spotted during the day. During the hot summers, they come out mostly in the morning.

If they are threatened, kingsnakes will emit an unpleasant musk and shake their tails. This is another example of Batesian mimicry, this time of a rattlesnake. They are also known to bite, though their bite is not poisonous to humans.

Savitzky said that some species of kingsnake are "bitier and snappier" than others, but that it mostly comes down to the individual temperament of the snake. In general, kingsnakes are well known for being docile once tamed. For this reason, they are popular pets.

Kingsnakes generally hibernate over the winter, according to the San Diego Zoo. They stay in caves, mammal burrows, rock crevices and hollow logs and stumps.

Kingsnakes are constrictors, said Savitzky. This means that they squeeze their prey to death and swallow it whole.

There are some common misconceptions about how constricting works, Heyborne told Live Science. One is that constrictors crush or break the bones of their prey. Another is that they suffocate it, squeezing the prey's lungs too tightly to work.

"It turns out that the squeezing overwhelms the circulatory system," explained Heyborne. "Blood cannot get to the brain, and the animal dies within seconds due to ischemia."

Kingsnakes are active hunters, not ambush hunters, according to the San Diego Zoo. They actively seek out their prey through scent. Once they've found it, they grab it with their mouths and start squeezing. Kingsnakes may only eat a few times a month depending on the size of their meals.

Kingsnakes eat rodents, birds, bird eggs and lizards. Kingsnakes in wet climates also eat turtle eggs and frogs, according to the Smithsonian National Zoological Park. Their most famous meal, however, is other snakes. Kingsnakes have a natural immunity to pit viper venom, meaning that they can eat venomous snakes like cottonmouths and rattlesnakes. They also eat nonvenomous snakes like rat snakes and garter snakes — and their fellow kingsnakes.

Kingsnakes are oviparous, meaning they lay eggs that spend little to no time incubating inside the mother, said Savitzky. Their mating time depends on the climate, with snakes in warmer climates mating earlier in the spring and snakes in colder climates waiting until late spring or summer. In general, mating season lasts from March until August, and females often have more than one clutch of eggs per season.

Males seek out females through chemical scent. They will fight each other for a female, wrestling other males until their heads are flat on the ground. Males often bite the female's neck during mating, according to the Savannah River Ecology Laboratory.

Female kingsnakes lay clutches of three to 24 eggs in debris, rotting logs or other secluded places. Mothers then leave the eggs, which hatch on their own two to three months later, according to the San Diego Zoo. Hatchlings can be up to a foot long and are completely independent from the moment they enter the world.

Kingsnakes reach sexual maturity between 2 and 4 years of age. Their lifespan in the wild is unknown, though they can live up to 20 to 30 years in captivity, according to the San Diego Zoo.

The kingsnakes found in North America are not considered endangered, though the populations of some are decreasing, according to the International Union for Conservation of Nature's Red List of Threatened Species. The Todos Santos Island kingsnake is critically endangered, however. Scientists are also concerned that the population of eastern kingsnakes in the southeastern coastal plain and Florida is decreasing. While the cause of the decrease is uncertain, some suspect invasive fire ants that may swarm and eat kingsnake eggs or newly hatched young, according to Outdoor Alabama.