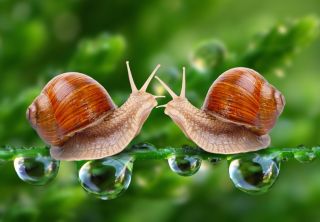 This Valentine's Day, mischievous Cupid will be fluttering about with bow in hand, seeking out mortal hearts to pierce with his love-tinged arrows. But the winged god isn't the only one known for this kind of behavior — oddly, land snails are also known to shoot "love darts."

Land snails belong to the gastropod class, which includes thousands of snail and slug species that sport a wide range of reproductive behaviors.

Mating for these species typically occurs in the wetter months, said Joris Koene, a biologist at the University of Amsterdam in the Netherlands whose research focuses on love darts.

All land snails are hermaphrodites, meaning that the animals have both male and female reproductive organs. The snails spend their days looking for food and seeking out potential mates using chemical (scent) cues. [Photos: Bizarre Sex Lives of Hermaphrodite Sea Slugs]

"They have eyes at the tips of their tentacles, but they don't really see that well, and their hearing is also pretty much absent," Koene told Live Science. "So one way of finding partners is by locating slime trails that they leave and hopefully following in the right direction."

When two adult land snails meet up, they engage in a courtship dance, in which they circle around each other and touch each other with their tentacles. "When you look at them from the top, they look like like yin and yang," Koene said.

During this ritual, the snails look for traits that they find appealing, such as a large body size, which is suggestive of good fitness and being able to invest more energy into egg production.

For many species, the next step in the mating process is to shoot their love darts into each other.

At least nine families of land snails produce love darts, though the exact number really depends on your definition of the structure, Koene said. Some species have dart structures made of hard calcium carbonate (the same material that makes up their shells), while others have softer structures made of a fibrous substance called chitin. "I tend to not call those [chitin structures] love darts," he said.

Though it's said the snails "shoot" their love darts, the calcium carbonate structures don't actually fly through the air. Rather, the love darts are formed within a muscular sac in the body that forcefully everts when a snail comes into contact with its mate, piercing its body and hopefully reaching the hemolymph (bloodlike fluid in invertebrates).

These love darts come in all shapes and sizes — and numbers.

Many species shoot a single dart, while others may shoot multiple darts. Some snails, such as the Japanese species Euhadra subnimbosa, will repeatedly jab their mates with the same dart over and over again for nearly an hour.

In a 2006 study in the journal The American Naturalist, Joene and his colleague Satoshi Chiba found that E. subnimbosa stabs its partner, on average, a staggering 3,311 times.

When the muscular sac everts, two glands attached to it squirt a kind of mucus onto the dart, which enters the female-acting snail's hemolymph. "This mucus modulates contraction in the female reproductive system," Koene said.

The mucus closes off the entrance to a certain organ in the receptive snail's body that would otherwise "digest" a mate's sperm, allowing more of the sperm to reach the sperm storage organ and increasing the male-acting snail's chance of fatherhood.

Until now, the makeup of this mucus has remained unknown. But in a study published recently in the Journal of Biological Chemistry, Koene and his colleagues identified, for the first time, one of the compounds in the mucus. "We are trying to get some idea of how these compounds evolve, but first you need to know what they are," he said.

After a snail shoots its partner with its love darts, its partner will do the same (sometimes this exchange is done simultaneously).

Next, the pair will copulate by pushing their genital openings together and simultaneously everting their "penises" into each other. They then pass a spermatophore (sperm packets) to one another, a process that can take up to 6 hours. [#JunkOff: Why Animal Genitals Are Important to Science]

After mating, the land snails will go their own ways, and possibly mate with other snails.

But a 2012 study in the journal Animal Behavior found that the love darts of E. quaesita have a secondary function: It makes the snails reluctant to mate again.