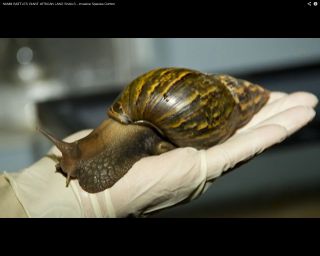 A giant African land snail, as big as a man's hand.
(Image: © AnimalWire)

They're big, they're slimy, and they're eating their way across Florida.

The giant African land snail (Achatina fulica) can grow as large as a rat. They live up to nine years and have the annoying habit of eating through stucco and plaster walls for the calcium they need to grow their baseball-size shells.

Like many non-native invasive animals, they were initially brought into Florida as pets, according to Denise Feiber of the Florida Department of Agriculture and Consumer Services.

"They're huge, they move around, they look like they're looking at you ... communicating with you, and people enjoy them for that," Feiber told Reuters.

"But they don't realize the devastation they can create if they are released into the environment where they don't have any natural enemies and they thrive," Feiber said.

Not only are the ravenous snails a major threat to Florida's multibillion-dollar agricultural industry, their shells are big and hard enough to blow out a tire, making them a serious road hazard as well.

Still not worried? Then consider the fact that the giant African land snail — which can lay up to 1,200 eggs at a time — also harbors a parasitic worm that can cause a form of meningitis in humans.

"They're a trifecta,” Feiber told Ocala.com. "They're a risk to property, health and agricultural resources and landscapes."

The Sunshine State is already home to a notorious menagerie of invasive species, from the alligator-eating Burmese python to the carnivorous, gender-bending Asian swamp eel, which can crawl across land and change sex from male to female if the latter are in short supply.

A meeting of giant snail specialists was recently convened in Gainesville to address the state's burgeoning snail population, which for the time being is limited to the Miami-Dade area of South Florida.

"The idea was to look at our program in Miami and ask ourselves: How are we doing?" Trevor Smith, a scientist with the Florida Department of Agriculture and Consumer Services, told Ocala.com.

Though new metaldehyde-based pesticides might be able to stem the tide of giant snails, Smith is still concerned about the pests spreading their slimy snail tracks farther afield. "I think it has the capability to travel up to north Florida," he said.