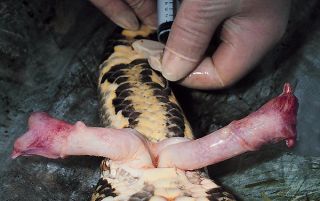 Did you know that male black widow spiders have corkscrew-shaped genitals? Or that barnacle penises are up to eight times the length of barnacle bodies? Or that echidnas have frankly horrifying four-headed dangly bits?

If you've been following scientists on Twitter in the past week or so, you probably do. That's because biologists have gone wild posting junk shots of their research subjects, from meerkats to cheetahs to some truly bizarre ants. The #JunkOff hashtag took off last week, and not entirely for sophomoric reasons: Animal genitalia are actually a major window into how evolution works.

"It all goes back to the basis of animal behavior and evolution," said Anne Hilborn, a doctoral student at Virginia Tech and cheetah researcher who launched #JunkOff and helped start the warmer-and-fuzzier follow-up hashtag, #CuteOff.

As #JunkOff illustrates, the world of genitals is ... diverse. And maybe a little scary. But really, let's focus on the diversity. [The 9 Weirdest Animal Penises]

Alligators, for example, have enormous, permanently erect penises made of connective tissue called collagen. Instead of inflating with blood like most mammalian penises, the alligator penis pops out of the cloaca (the alligator all-purpose genital and waste opening) with the help of rubber-bandlike tendons and muscles. And, yes, there is video.

Even creepier are the detachable genitalia of the male orb-web spider (Nephilengys malabarensis). The "palps," or sperm-transferring organs, of these spiders stay attached to the female when mating is done, in part so they can keep working if the female spider decides to chow down on her mating partner — these spiders are sexual cannibals. Similarly, black widow males leave the tips of their corkscrew genitalia inside the female. Leaving genitals behind may save spiders energy in the long run. [Animal Sex: 7 Tales of Naughty Acts in the Wild]

Even paleontologists got into the #JunkOff fun, tweeting pictures of dire-wolf penis bones that were preserved in the La Brea Tar Pits in Los Angeles. Yes, many mammal penises have actual bones, also known as baculums. Dogs have them, as do chimpanzees, bears and walruses. (Chimps also have penis spines, a feature that humans — fortunately? — have lost.)

And let's not give females' short shrift: Many mammalian females have an analogous genital bone, the baubellum, which sits below the clitoris. This bone, also called the os clitoridis exists in many rodents, as well as bats and some primates. Perhaps the craziest clitoris out there belongs to hyenas, which is about 7 inches (18 cm) long and looks almost like a penis. Female hyenas give birth through it.

"It's one of my favorite ice-breaking conversation topics at parties when I don't know what to say," Hilborn said.

If the eyes are the windows to the soul, the junk is the window to evolution. Genitalia are important because they're front and center in sexual selection — and that means that private parts are thought to evolve faster than other body parts.

Very closely related species often have dramatically different genitals, biologist Julia Klaczko, who researches lizard genitalia at the University of Campinas in Brazil, told Live Science in January. Klaczko and her team measured the rate of evolution in lizard hemipenes, the penis-equivalents for snakes and lizards. They then compared the rate of hemipene change with the rate of change in lizard limb length and throat flaps called dewlaps.

They found that male genitalia evolve six times faster than limbs or dewlaps, explaining the large diversity seen in lizard hemipenes. It's possible that females are picky about penises, so males are constantly evolving new, better options. Or perhaps the penis evolution is an example of an evolutionary arms race, in which males and females both evolve genitals in an effort to gain the most control over fertilization.

That sort of arms race is apparent in ducks. Many species sport long, corkscrew-shaped penises. Females, in turn, have corkscrew vaginas. But the vaginas spiral in the opposite direction as the penises, making it harder for sexually aggressive males to fertilize a female against her will. (And male ducks can get very aggressive. Just ask the discoverer of dead gay duck sex.)

Certain beetles, too, appear to be involved in a genital race — one that leads to the differentiation of new species. Some species of tiny seed beetles have truly intimidating male genitals studded with more than 100 spikes. As male beetles evolve more spikes, researchers found, females evolve tougher genitals to survive mating. This arms race is costly, leading to fewer offspring in species with spikier junk.

"Normally, we think of evolution being adaptive, with organisms becoming better and better adapted to their lifestyle," study researcher Göran Arnqvist, a biologist at Uppsala University in Sweden, told Live Science in 2007. "Here we have an example of evolution that leads to something bad."

In many cases, animals keep their private business private. In wild cheetahs, Hilborn said, a couple of males will pick out a female and hang around her for several days — not even leaving to hunt — until she's ready to mate. Many mating buddies are brothers, but others are unrelated, Hilborn said, and it's not clear how the female decides which cheetah she mates with.

"The actual mating process has only been seen once or twice," she said.