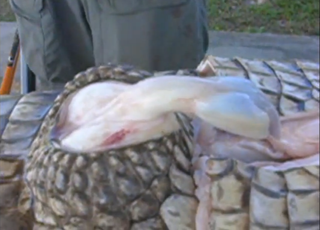 Alligators use bizarre, permanently erect penises that pop out of their bodies and are sucked back in just as quickly.
(Image: © YouTube)

Unlike many other reptiles and mammals, alligators sport permanently erect penises that hide inside their bodies, new research reveals.

The reptiles sport fully erect penises made of tough, fibrous tissue that shoot out of their bodies and get pulled back in just as quickly, according to the study, which is detailed in the March issue of the journal Anatomical Record.

"It is really interesting and really bizarre, very different from anything we've seen in vertebrates," said study author Diane Kelly, an anatomist at the University of Massachusetts.

Very little was known about how alligators mate, Kelly told LiveScience. In 1915, one scientist briefly described the alligator penis in a paper, but "at the end of it he actually says something to the effect of 'I have no idea how this thing works,'" Kelly said. [The Weirdest Animal Penises]

To find out, Kelly procured a few dead American alligators from the Rockefeller Wildlife Refuge in Louisiana, one of which was more than 13 feet (4 meters) long. She dissected the alligator and was surprised at what she found.

Hidden inside the alligator's waste and reproductive orifice, known as a cloaca (which is Latin for "sewer"), was a nearly 2.75-inch (7-centimeter)-long, pasty white phallus.

When she dissected the penile tissue, she found it was filled with a stiff, fibrous material called collagen. Kelly then filled the penis with saline fluid. In mammals, turtles and birds, inflating the vascular region of a penis with saline enlarges it, allowing anatomists to see how the penis becomes erect.

"I tried it with the alligator and I got no length change, I got no diameter change. I got nothing," Kelly said. "It became very clear to me right then and there that there was something very different."

Kelly surmised that the vascular space inside the alligator penis was so full of collagen that it was simply too stiff to inflate.

To see how it popped in and out of the alligator's body, she tugged on various tendons and muscles in the cloaca region and found one set of muscles that caused the penis to shoot out. Another set of tendons attaches to the base of the penis like rubber bands, she said.

"As soon as those muscles relax, the penis gets whipped back into its original position."

Kelly isn't sure whether the penis comes out only during mating or also at other times, though she thinks it's the former. Since crocodiles and alligators are closely related, crocodile penises probably work the same way, she said, though she and other scientists have never studied the crocodile penis.

As a next step, Kelly is teaming up with researcher Brandon Moore at Louisiana Tech University, who is studying the ejaculatory system of the alligator.

"He was doing the glans end, and I was doing the erectile end, and we figured between the two of us we can do a really good job of getting the whole thing described."

Editor's Note: This article has been corrected to reflect that Kelly was working on the erectile end, not the rectal end, of the penis.