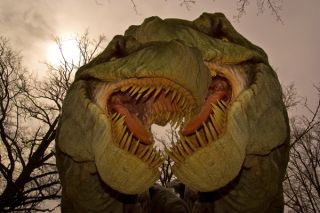 Paleontologists spend a surprising amount of time contemplating dino sex. They have all kinds of theories as to how it went down, but unfortunately, there's no actual flesh to, well, flesh out the details.

Birds and reptiles are dinosaurs' closest living relatives, and because they all have a cloaca a single opening for urination, defecation, and reproduction most paleontologists believe that dinosaurs did the deed through such an orifice as well.

On the other hand, males might have had penises, and very prominent ones at that. From zero to enormous, the ratio of penis length to body size varies drastically among dinosaur descendants, making it next to impossible to speculate on the question of their endowment. Some two-foot-tall ducks, for example, have 7-inch penises , while 15-foot-long crocodiles have mere 4-inch members. A 40-foot-long Tyrannosaurus rex , therefore, may have had a 10-inch penis, or a 12-foot-long one.

Furthermore, according to Brian Palmer at Slate, "Paleontologists can only guess about mating positions, duration, and behavior. The majority view seems to be that large males like the Mamenchisaurus a 60-foot-long behemoth featured in the new exhibition [at the American Museum of Natural History] probably mounted from behind, like modern giraffes and elephants."