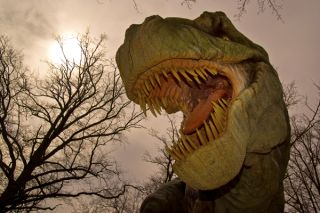 On Jan. 25, researchers at the Zoological Society of London published what was supposed to be a definitive answer to the hotly-debated question: What did Tyrannosaurus rex eat? Using an ecological model derived from predator-prey relationships in the Serengeti, the scientists determined that the king of the dinosaurs most certainly did not scavenge for carrion, but rather that it roamed vast territories hunting grazing species such as Triceratops. In short, in the words of one press release, "T. rex hunted like a lion, rather than regularly scavenging like a hyena."

But then on Feb. 9, another study was published in the open-access journal PLoS ONE that seemed to show the predator could not possibly have been such a noble hunter. The same number of fossilized T. rex skeletons were found in a 1000-square-kilometer region in Montana called the Hell Creek Formation as specimens of Edmontosaurus -- the dinosaur thought to be T. rex's primary prey.

Typically, one would expect three or four times more prey than predators.

"This says that T. rex is not a cheetah, it's not a lion," said Jack Horner, a paleontologist at the Museum of the Rockies in Montana who co-led the study with Mark Goodwin at UC Berkeley. "It's more like a hyena."

In a press release, he explained that the ability to prey on dead things as well as live ones makes "opportunistic predators" like hyenas twice as abundant as top predators like lions and cheetahs. The apparent population size of T. rex puts it on the hyena side of the dichotomy.

Strangely, then, in regards to the question of whether T. rex ate like a lion or a hyena, two different research methods have pointed with great confidence in polar opposite directions. And there is yet a third direction in play.

A study published in Oct. 2010 by Yale researcher Nick Longrich and his colleagues asserted that the tyrannical dinosaurs in question didn't just prey on individuals more docile or deader than themselves. They also ate each other. Longrich found huge bite marks that could only have been made by T. rex on several fossilized T. rex arm and leg bones. Scientists believe the marks definitely resulted from meat-eating.

Unfortunately, though, this new-found evidence of T. rex cannibalism does not answer the question of whether the dinosaur usually scavenged or only hunted live prey, since Longrich isn't sure whether the bite marks he found were inflicted long after each specimen died or immediately after it was killed in a fight.

So as it stands, no one knows quite what to think.