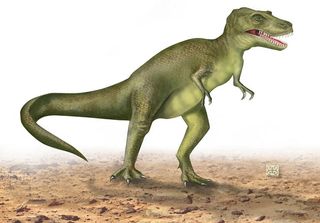 Virtual races between prehistoric beasts reveal that one of the smallest carnivorous dinosaurs would have zipped past the lumbering Tyrannosaurus rex by a long shot. But even so, the "tyrant lizard king" was no slouch.

Turns out, T. rex could have outrun some of the buffest athletes.

“The figures we have produced are the best estimate to date as to how fast these prehistoric animals could run,” said Phil Manning, a paleontologist at the University of Manchester in England.

Manning and his Manchester colleague Bill Sellers, a biomechanics expert, used a supercomputer to calculate the top-running speeds of five meat-eating dinosaurs.

T. rex would just barely run past a professional soccer player (footballer) in a race, reaching an all-out speed of about 18 mph (8 meters per second), the results showed. However, chicken-sized bipedal competitor Compsognathus could whip around a race track at nearly 40 mph (18 m/s). That's 5 mph quicker than the computer's estimate for an ostrich, the fastest living animal on two legs.

Based on the computer simulations, here are the estimated race results:

“While not incredibly fast, this carnivore [T. rex] was certainly capable of running and would have little difficulty in chasing down footballer David Beckham for instance,” Manning said.

But unlike soccer champs today who get sent off with applause (or in some cases, riots), prehistoric winners got their next meal while the losers lost their lives.

The running-speed results intrigue paleontologists interested in the predator-prey dynamics of the prehistoric beasts. "Chasing down prey is a vital factor in the lives of extant predators, as is the avoidance of being captured for prey animals," the scientists write in a report of their research to be published online tomorrow by the Proceedings of the Royal Society B.

The scientists say their calculations are the most accurate to date for dinosaur running speeds.

“Previous research has relied on data from extant bipedal models to provide clues as to how fast dinosaurs could run,” Sellers said. “Such calculations can accurately predict the top speed of a six-ton chicken, but dinosaurs are not built like chickens and nor do they run like them."

Sellers and Manning instead fed information about the skeletal and muscular structure of each animal, including the extinct dinosaurs, into a 256-processor supercomputer, which calculated the gait and posture needed for top-running speeds.

The computer spent up to a week mapping out the optimal biomechanics of each animal, ranging from clumsy putterer to smooth runner.