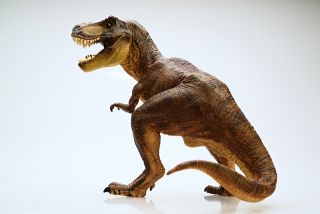 A few days after Thanksgiving dinner, a popular tradition calls for two people to grab opposite ends of a dried wishbone and pull until the bone breaks in two.

The irony: The wishbone is special because it's one piece.

The furcula (the technical term for a wishbone) is formed by the fusion of two collarbones at the sternum. The furcula is an important part of a bird's flight mechanics — a connecting point for muscles and a strengthening brace for wings. The bone is elastic and acts as a spring that stores and releases energy during flapping. (Ever try to snap a wishbone before it's been dried?)

Scientists once thought the furcula was unique to birds. Paleontologists now tell us that the bone dates back more than 150 million years to two-legged, meat-eating dinosaurs including the Tyrannosaurus and Velociraptor. These reptilian movie stars didn't fly. Their furculas likely served as structural supports as the dinos held their prey.

The furcula is a key component of the commonly accepted theory that birds are the descendants of dinosaurs.