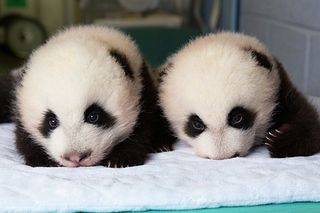 Science Twitter has gone full squee. Biologists are tweeting pictures of their adorable research subjects in a #CuteOff, and the results are downright nom-able.

Baby elephants? Adorbs. Pert-nosed pikas? Too cute. Hummingbird nestlings? Heart-stopping. Meanwhile, #TeamHerpetology is making a strong showing with shots of baby sea turtles that fit in the palm of a hand, and #TeamEntomology is showing how sweet bugs can be.

"I don't generally think of fish as cute, but there were some alarmingly cute fish," said Anne Hilborn, a doctoral student and cheetah researcher at Virginia Tech who helped launch the hashtag. [See Photos of the Cutest Deep-Sea Creatures]

While the #CuteOff may open eyes to wildlife conservation, it's also an opportunity to look at what really makes people squee. What are the essential ingredients of cute? Based on the types of animals posted — and previous scientific research on adorableness — here are seven features that could help an animal win a cuteness contest. (This #CuteOff emerged on Twitter following a perhaps, ahem, more salacious animal contest, the #JunkOff.)

Big eyes, full heart, can't lose. It's pretty clear that a wide pair of peepers pushes an animal high in the cuteness ratings. Whether it's a puffer fish or a pygmy possum, many of the animals Tweeted in the #CuteOff are blessed in the eye department. Even plants are getting in on this action: Atmospheric scientist Brian DiNunno tweeted about the doll's-eye plant (Actaea pachypoda), which has fruit that looks like a stalk full of googly eyes. (These eyes, however, can kill you — the berries contain toxins that can cause cardiac arrest in humans.)

Big eyes may be so alluring because they remind people of human babies. Huge eyes trigger a caregiving response in adult humans, research finds, as do other babylike features such as chubby cheeks, a protruding forehead, and a small nose and mouth. A 1979 study in the journal Infant Behavior and Development reported that even among babies, those with more infantile features were perceived as cuter. The baby-loving response appears to be deeply embedded, even in nonparents.

"Cute infants at all ages tend to have large foreheads, large eyes, small features and narrow faces below the eyes," the researchers wrote in the 1979 paper. It's not hard to see how animals with similar features can trip the brain's cuteness detector.

Given that infantlike features prompt paroxysms of glee, it's no surprise that baby animals were #CuteOff front-runners. Infant sooty mangabeys? Yes, please.

Humans respond to baby animal cuteness in the same way they respond to baby human cuteness, according to a 2013 study published in the journal Behavioural Processes. The researchers found that women were more sensitive to the appeal of infant animals than were men, and that people who had higher levels of empathy also found baby animals more heart-melting than did people with lower empathy levels.

This love of baby animals may have spilled over from the evolutionary drive to protect infants of one's own species, the researchers wrote. But bonds with animals can also contribute to well-being, the researchers noted, so perhaps baby animal cuteness stands on its own two (or four) feet.

If you can't be a baby, at least stay the size of one. That seems to be one message of the #CuteOff, which featured a cascade of pictures of almost absurdly small creatures. [Photos: See the World's Cutest Baby Wild Animals]

The link between smallness and cuteness isn't as well established as the link between babylike features and cuteness. But the connection is certainly there. (Evidence: Buzzfeed has done a listicle.) Without research, it's only possible to speculate. Perhaps small things simply remind people of babies. Or perhaps, as posited in a 2012 article by a museum studies professor in Insite Magazine, miniature things remind people of toys and give people a sense of power because they know they have control over something so small.

#CuteOff was officially kicked off by herpetologists, who tweeted a picture of a teeny, tiny lizard and declared premature victory.

But it soon became clear that mammals were going to dominate the #CuteOff feed, much to the chagrin of scientists who study less-vaunted taxons.

"There was some talk about the inverts [invertebrates] and the fish joining up to challenge mammals, because mammals are always thought of as cute," Hilborn said. "It was interesting to see biology rivalry and cooperation come out over Twitter."

Humans are mammals, of course, so perhaps it's no surprise that people are drawn to other fuzzy species. Which brings us to our next winning feature …

#TeamEntomology made a strong #CuteOff showing by showcasing species with features not normally associated with insects. The teddy bear ant (Tetramorium pulcherrimum) is a forest dweller in Africa that has what looks like a fine dusting of fur all along its back.

Fuzzy bees, moths and flies also made a showing. To explain the appeal of fuzz, let's get wildly Freudian and blame mothers. Bear with us: In the 1950s, psychologist Harry Harlow did a series of famous experiments in which monkeys were "raised" by food-bearing "wire mothers" (really, wire frames with monkeylike faces) and terry cloth surrogates, which didn't dispense food. Even though the wire mothers provided sustenance, the baby monkeys always snuggled back up with their terry-cloth "moms" when not nursing. The studies were groundbreaking, introducing the notion of psychological attachment not based simply on nourishment.

What can we take away from Harlow's work? Primates really like cuddly things. Is it too much of a stretch to say that a furry ant might trip those same brain circuits?

Let's bring our cute-related theorizing back to solid ground. You know what's cute? Dolphins. You know why? They always look like they're smiling.

The appeal of smiles clearly extends to animal faces, a fact that #TeamHerpetology exploited to good effect. Frogs, snakes and lizards may lack fur, but they can plaster on some adorable grins.

At some point, the #CuteOff hashtag reached escape velocity, and nonscientists started to join in on the fun. Since then, wild and weird animals have been joined by (admittedly adorable) images of dogs and cats.

Interestingly, domestication and cuteness seem to go hand in hand. Domestication is a process in which the friendliest, most docile animals are bred together to produce animals that can live with humans. Over the generations, these traits come to dominate.

Alongside these personality differences, though, come changes in appearance. This was most famously demonstrated in a Russian-fox domestication experiment, which turned foxes tame within a mere four generations or so, reported National Geographic. The domesticated foxes also got smaller and floppier eared than their ancestors; they also developed spotted coats.

Similar effects have been seen in other species. Domesticated animals tend to have piebald coats, smaller brains, smaller teeth and floppier ears than their wild counterparts. In a 2014 study in the journal Genetics, researchers reported they had found that all of these trait changes may originate in the neural crest, an embryonic structure that produces facial skeletal and connective tissues as well as nerve structures. Thus, when human breeders pair mellow animals, they're inadvertently selecting creatures with "cuter" (often more juvenile) physical features.