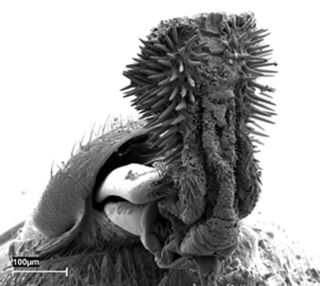 The male copulatory organ of bean weevils is armed with sharp spikes that cause internal injuries to females during mating. Females have, however, evolved resistance to these remarkable and harmful structures.
(Image: © Johanna RÃƒÂ¶nn)

The genitals of male seed beetles are extraordinarily spiny, helping to anchor the males inside females as they attempt to impregnate them. Unfortunately, these spikes damage the females, potentially compromising the entire reproductive mission.

Now scientists have discovered an evolutionary arms race with these beetle genitalia, with female genitals growing tougher the spinier the male genitals are. The speed at which genitals change in this battle of the sexes could help shed light on how new species evolve.

A similar battle of the genitals among waterfowl was announced in April.

In the new research, evolutionary biologist Göran Arnqvist at Uppsala University in Sweden and his colleagues investigated seven species of seed beetles, pests a few millimeters in size that infest beans and peas worldwide. A number of these species have more than 100 spikes on male genitals, while others have none.

Arnqvist and his colleagues found that as male genitals became spikier and more harmful, females evolved tougher genitals to defend themselves.

The researchers also discovered the more extreme the arms race became, the fewer offspring females generated, presumably due to effort those females had to instead expend dealing with male damage.

"Normally we think of evolution being adaptive , with organisms becoming better and better adapted to their lifestyle," Arnqvist told LiveScience. "Here we have an example of evolution that leads to something bad. We've been able to confirm an old theoretical prediction that arms races between males and females can be costly for species."

When it comes to species where males copulate with females (as opposed to ones in which eggs get fertilized outside the female), "male genitalia evolve the most rapidly," Arnqvist said. "Understanding why male and female genitalia can change so rapidly is very interesting for understanding how new species are formed."