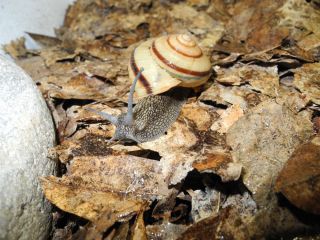 An Euhadra quaesita snail, which, like other snail species, uses a "love dart" to stab its partner while mating.
(Image: © Kazuki Kimura)

When snails decide to get it on, they don't turn on Barry White to get in the mood. Nor do they give each other chocolates or roses. Instead, during snail foreplay, one partner stabs the other with a so-called "love dart," a sharp dart produced by the snail's body to aid copulation. Talk about romantic.

About a third of all snail species manufacture these darts that are either calcareous (made of calcium carbonate, essentially chalk) or chitinous (made of or chitin, the stuff of insect exoskeletons).The snails literally stab these darts into their partners sometime during the (often) long, drawn-out mating process. But why employ this … unique … mating strategy?

Some studies have found that these darts help a snail's sperm survive longer inside its partner. The darts deliver a healthy dose of mucus and hormones that help the sperm reach a storage area within the female reproductive system by closing off "dead-end" pathways.

Now, new research has found that something in the love dart has a second function: It makes Euhadra quaesita snails slower to re-mate. [10 Amazing Things You Didn't Know About Animals]

Kazuki Kimura, a researcher in the department of ecology and evolution at Tohoku University in Sendai, Japan, and colleagues studied 50 E. quaesita snails, a common large land snail in eastern Japan. The researchers paired snails up and gave them the opportunity to get physical every two days.

Perhaps the ladies were actually just reluctant to get stabbed a second time? (Actually, snails are hermaphrodites, and both partners do plenty of stabbing during their 2-to-2.5-hour mating sessions.) To test whether the snails were physically harmed during mating, Kimura and colleagues injected the mollusks with snail mucus. Simply having the hormones in their bodies made the snails much less likely to mate, so the simple physical effects of stabbing weren't to blame.

Finally, the snails— whether stabbed or injected— continued to lay eggs as normal, Kimura said. "So we think that sperm donors are expected to attain high fertilization success" while the mucus keeps the sperm recipient from re-mating, making the sperm donor more likely to father baby snails and have its genes passed on.

Next up: identifying what hormone in the mucus makes snails react this way. "I think this is fundamental knowledge to understand the evolution of love-dart mucus," Kimura said.

The study appeared online Jan. 21st in the journal Animal Behaviour and will appear in a forthcoming print edition.