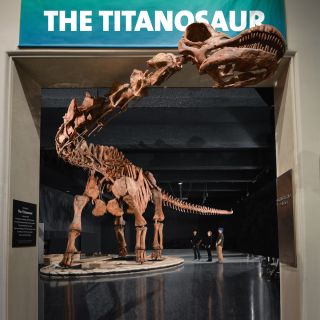 The dinosaur model is larger than the exhibition area, so it welcomes guests to the museum at the elevators, as they enter the hall.
(Image: © Copyright AMNH/D. Finnin)

An incredibly long-necked dinosaur, with leg bones the size of couches, is so massive that is has invaded not one, but two rooms at the American Museum of Natural History (AMNH) in New York City.

The enormous titanosaur — an herbivorous beast that weighed 70 tons (64 metric tons) when alive some 100 million years ago — is the newest permanent exhibit to join the museum. It measures 122 feet (37 meters) long, almost the length of three school buses.

The behemoth is so large it dwarfs the museum's famous model of the blue whale by nearly 30 feet (9 m). But the whale wins in heft; in real life, blue whales (Balaenoptera musculus) weigh up to 200 tons (180 metric tons), almost three times as much as the titanosaur, museum researchers said. [See Photos of the Titanosaur Reconstruction]

The titanosaur dates to the Cretaceous period, but the dinosaur's modern story began in 2012. That's when a rancher in southern Argentina stopped by the Museum of Paleontology Egidio Feruglio in Argentina to disclose that he had found fossils on his land. In 2014, paleontologists visited the desert site by the farm of La Flecha and found a treasure trove of dinosaur remains.

After 18 months of excavations, the researchers uncovered 223 fossilized bones from six individual titanosaur dinosaurs, including an 8-foot-tall (2.4 m) femur, or thighbone. The femur's unique shape and size suggest that the titanosaur is a new species and one of the largest dinosaurs ever uncovered, researchers told journalists today (Jan. 14).

One of the dig's leaders, Diego Pol, earned his doctorate at a joint program between Columbia University in New York and the AMNH, in the lab of Mark Norell, the museum chair of paleontology. Soon after the dig began, Pol sent Norell a photo of himself lying on the dinosaur's gigantic femur, much like a person would recline on a living room couch, Michael Novacek, senior vice president and provost of science at the AMNH, told journalists.

All of the individual dinosaurs discovered were young adults, identified as such because their neck vertebra hadn't fully fused together, as they do in adults, the researchers said. The young dinosaurs had died at three different moments in time, anywhere from a few years to centuries apart, the scientists said. It's possible that the titanosaurs were separated from their herd and died of stress and hunger, the researchers said.

However, the study announcing the new species to the scientific community is about four months away from publication. This means that the researchers were unable to share the species name. Instead, they called it "the titanosaur," and explained how it came to reside in the museum.

After excavating the fossils, researchers spent six months transforming 84 of the bones into 3D, lightweight fiberglass replicas. The scientists filled in the missing gaps, including the skull, by studying the bones of related dinosaurs.

"The skulls of these kinds of sauropod dinosaurs are very rare," Norell told Live Science. "They're extremely fragile — the bones are really paper thin."

Though they found a few elements of the fossilized skull, the researchers chose to model the skull after a few well-preserved skulls of smaller animals related to titanosaurs, and "scaled it up to the size that this animal would be," Norell said. [Photos: One of the World's Biggest Dinosaurs Discovered]

In all, the titanosaur would have stood about 20 feet (about 6 m) tall at its shoulder, and 46 feet (14 m) tall with neck held at a 45-degree angle. The museum replica's neck is slightly lower, thanks to the approximately 19-foot-high (5.8 m) ceilings in the room.

In addition to the replica, museumgoers can see original fossils of the dinosaur's humerus, ulna, radius and scapula, on temporary display. The entire exhibit, called "The Titanosaur," opens Friday (Jan. 15).

Titanosaurs have been found on every continent of the world. The new exhibit replaces a Barosaurus, another long-necked, but smaller sauropod. Another upcoming exhibit at the museum, "Dinosaurs Among Us," is about the evolution of birds and opens to the public March 21.