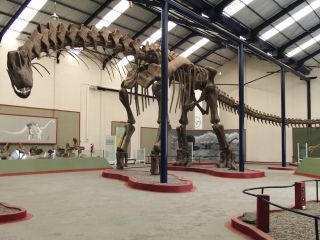 This 131-foot-long (40 meters) skeleton of an Argentinosaurus huinculensis, on display at the Museo Municipal Carmen Funes in Argentina, was digitally reconstructed to examine the massive dinosaur's movement, including how it walked and ran.
(Image: © Bill Sellers, The University of Manchester)

The Argentinosaurus is one of the largest known dinosaurs, but scientists were unsure how exactly the massive creature plodded across the Cretaceous Earth, until now. Using sophisticated computer models, researchers have digitally reconstructed the Argentinosaurus, enabling them to "watch" the dinosaur take its first steps in over 94 million years.

A team of researchers led by Bill Sellers, a professor of computational and evolutionary biology at the University of Manchester in the United Kingdom, used lasers to scan a 131-foot-long (40 meters) skeleton of the Argentinosaurus huinculensis. The scientists then created advanced computer models to digitally recreate how the dinosaur walked and ran.

"If you want to work out how dinosaurs walked, the best approach is computer simulation," Sellers said in a statement. "This is the only way of bringing together all the different strands of information we have on this dinosaur, so we can reconstruct how it once moved."

Previously, it was suggested Argentinosaurus' bulky size may have led to problems walking, but the new simulations show the massive, 88-ton dinosaur was able to keep up a pace of roughly 5 mph (8 km/h). [Image Gallery: Dinosaur Fossils]

"The new study clearly demonstrates the dinosaur was more than capable of strolling across the Cretaceous planes of what is now Patagonia, South America," study co-author Lee Margetts, a specialist in high-performance computing and engineering simulation at the University of Manchester, said in a statement.

Being able to scan and digitally reconstruct the extinct Argentinosaurus was critical to understanding its range of motion, because there are no similar living examples, Sellers said.

"The important thing is that these dinosaurs are not like any animal alive today and so we can't just copy a modern animal," he explained. "Our machine learning system works purely from the information we have on the dinosaur and predicts the best possible movement patterns."

Researchers are keen to study how various living and extinct creatures move, in order to better understand human locomotion.

"All vertebrates from humans to fish share the same basic muscles, bones and joints," Sellers said. "To understand how these function we can compare how they are used in different animals, and the most interesting are often those at extremes. Argentinosaurus is the biggest animal that ever walked on the surface of the Earth and understanding how it did this will tell us a lot about the maximum performance of the vertebrate musculoskeletal system. We need to know more about this to help understand how it functions in ourselves."

"Similarly if we want to build better legged robots then we need to know more about the mechanics of legs in a whole range of animals and nothing has bigger, more powerful legs than Argentinosaurus," Sellers said.

Sellers and his colleagues at the University of Manchester plan to use the same techniques to recreate the movements of other dinosaurs, including Triceratops, Brachiosaurus, and the king of carnivorous dinosaurs, the Tyrannosaurus rex.

The detailed findings of the new study were published online today (Oct. 30) in the journal PLOS ONE.