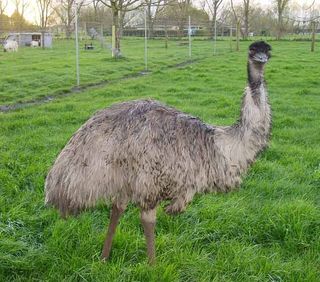 Scientists believe they have solved the mystery of the strange 167-million-year-old footprints of predatory dinosaurs that appeared to do a cross-step as they walked the ancient Earth.

By watching how the flightless modern bird known as the emu [image] walks, researchers surmise that the dinosaurs often stopped and adjusted their position to get a better idea of their environment.

The Red Gulch Dinosaur Tracksite in northern Wyoming is home to thousands of dinosaur footprints, made in limy mud during the Middle Jurassic, when the area was the shoreline of an ocean dubbed the Sundance Sea.

((ImgTag||right|null|null|null|false)) The footprint of an emu. Credit: GSA

Paleontologists suggest these tracks were left by therapods -- carnivorous bipedal dinosaurs such as Tyrannosaurus rex. Dinosaur bones from the Middle Jurassic are rare in North America, making it hard to match these footprints with any particular species. Based on the length of their strides, these dinosaurs were roughly the size of humans.

Mysteriously, sometimes the dinosaur tracks are crossed -- that is, the right foot crossed over the left, or vice versa. To solve this puzzle, researcher Brent Breithaupt, curator and director of the University of Wyoming's Geological Museum in Laramie, Wyo., and his colleagues hunted for modern animals that walked in similar ways.

Large flightless birds are the most logical choice to study because evidence suggests that they, along with all birds, are descended from dinosaurs. They are also roughly the size of humans, bipedal, and their legs are kept relatively close together, just as was the case with the enigmatic dinosaurs of Red Gulch.

Not all flightless birds alive today are good choices or easy to work with. Ostriches have an attitude problem and are two-toed, unlike therapods, which had three-toed feet, Breithaupt explained. Rheas have three toes, but are "like working with a bunch of kindergarteners on too much sugar," he said. Emus have three toes and are relatively easy to study. Moreover, there was an emu ranch located in Colorado an hour from the researchers.

The emus, whose feet are not splayed very wide apart, often looked around as they walked, frequently creating crossed tracks.

"The tracks we see may represent the dinosaurs stopping in mid-stride as they keep aware of their environment—looking for predators, looking for food, looking for someplace to go," Breithaupt told LiveScience.

It also appears that the dinosaurs may have traveled in family groups, since there are juvenile and adult tracks. That could suggest some sort of parental care, Breithaupt said, or at the very least support the idea that the dinosaurs were social animals, just like modern birds.

Breithaupt presented his team's findings Oct. 25 at the annual meeting of the Geological Society of America in Philadelphia.