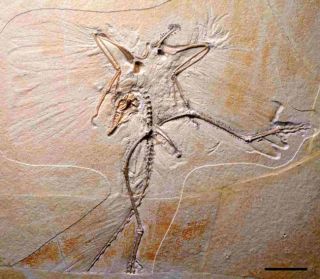 Image of the skeleton with wing and tail feather impressions of the tenth specimen of the first known bird, Archaeopteryx. The new specimen provides important details on the feet and skull of these birds and strengthens the widely but not universally accepted argument that modern birds arose from dinosaurs.
(Image: © G. Mayr/Senckenberg)

When it comes to feet, the earliest known bird species had more in common with Velociraptors than cardinals.

Modern bird feet have a hind toe that points backward and helps the birds perch on branches, power lines, and pirates' shoulders. And until a recent discovery of an extremely well preserved skeleton of the earliest known bird species, Archaeopteryx, scientists believed it too had a "perching toe."

The new fossil, known as the "Thermopolis specimen," is incredibly well preserved. It left clear impressions of its wing and tail feathers in the limestone it was encased in, and the skull is the best preserved of all the ten specimens ever discovered.

But it may be the feet that prove to be the most important aspect of the find.

"The feet of the new specimen are, by far, the best preserved," study co-author Gerald Mayr told LiveScience.

The feet of previously discovered specimens were sort of scrunched up, making it difficult for scientists to accurately determine toe configuration, resulting in reconstructions showing feet with a hind toe, typical of modern birds.

But the Thermopolis specimen, discovered in the Solnhoren region of southeastern Germany, clearly shows that Archaeopteryx's first toe extends from the side of its foot, like a human thumb, instead of backwards. The middle toe could be extended, and it had a large claw at its tip.

This configuration is similar to some late Jurassic dinosaur families, including the claw-footed Velociraptor and its cousins. As scientists consider Archaeopteryx as the first bird, this discovery strengthens the argument that modern birds evolved from dinosaurs.

This new interpretation will force scientists to rethink how Archaeopteryx got around, however. Scientists previously thought that it and other early dino-birds such as Microraptor gui climbed to tree tops, hopped off, and glided to nearby trees. But in lacking the hind toe, Archaeopteryx would have had a hard time perching on a branch and might have made a clumsy show of hopping off and gliding away.

It is unclear exactly when the perching toe developed, but it was within 30 million years after Archaeopteryx lived. By this time – the early Cretaceous period, about 120 million years ago – all birds appear to have a perching foot with a hind toe.

This discovery is detailed in the Dec. 2 issue of the journal Science.