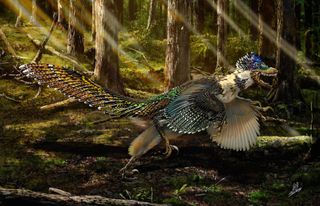 An artist's interpretation of a newfound species of dinosaur, Zhenyuanlong suni. Like Velociraptor, it had sharp claws and teeth.
(Image: © Chuang Zhao)

This year, paleontologists made headlines with news of incredible dinosaur findings the world over, and they expect 2016 will hold just as many surprises, scientists told Live Science.

For instance, researchers rocked headlines in 2015 with the discoveries of fossils showing a feathered batlike dinosaur (likely a failed attempt at early dinosaur flight, scientists told Live Science), a mysterious herbivorous cousin of Tyrannosaurus rex and a herd of duck-billed dinosaurs living in the chilly reaches of ancient Alaska.

"Part of the fun of paleontology is that you can't really predict what's coming down the road," said Andrew Farke, a paleontologist at the Raymond M. Alf Museum of Paleontology in Claremont, California. [Photos: Oldest Known Horned Dinosaur in North America]

Here are five hot trends that paleontologists expect to see in 2016 and the years ahead.

Just as in years past, paleontologists will continue to scour ancient rock for dinosaur fossils.

"We're still in a discovery phase of the science, and I don't see that ending anytime soon," said Steve Brusatte, a paleontologist at the University of Edinburgh. "People are still finding a new dinosaur once every week or two, on average."

Each finding helps scientists piece together the puzzle of dinosaur evolution and distribution, he said.

Researchers are also re-examining known fossils. Some specimens haven't been described in detail, making it difficult for experts to learn about anatomical features and how they relate to those of other animals, Farke said.

For instance, a study published in December in the journal PeerJ described an in-depth reexamination of an ankylosaur fossil discovered in Australia in 1989. The researchers' new analysis determined that the specimen belonged to a new genus and species of ankylosaur, prompting the name Kunbarrasaurus ieversi.

Re-examining known fossils isn't "ridiculously glamorous," Farke said, but "when you get a long paper published that has all the detailed figures, text and comparisons, that's what can really move the field forward."

Scanning technology is nothing new. Paleontologists have used computer tomography (CT) scanners since the 1980s. But back then, they had to visit hospitals, as the scanners were expensive and, for the most part, only available at medical centers, Brusatte said.

"Now it's become so standard that a lot of paleontologists have their own scanners in their lab," Brusatte said. "That would have been unheard of a decade ago."

However, these CT images used to remain on individual hard drives, inaccessible to other scientists. Now, with the advent of 3D printing, researchers can share the printing instructions online with their colleagues, educators and the public, who can print and study whatever specimen catches their eye.

"For a scientist, [3D printing] makes it easy to check things in the figures and determine what are these features, what does it look like, how does it compare with these other things?" Farke said told Live Science. [Photos: Incredible Near-Complete Stegosaurus Skeleton]

It's not always "finders keepers" when it comes to dinosaur discoveries. In the United States, private landowners can keep fossils discovered on their property, but not if the bones are dug up on public land. In other countries, depending on the laws, fossils belong to the government or to the person who uncovered them.

These laws aren't new, but authorities are starting to enforce them more than ever before, especially in countries such as Mongolia, China and Brazil, the experts said.

"Most countries have fairly discreet regulations on what can or can't be exported," Farke said. "It's the enforcement and ways that people try to work around it that gets a little dicey."

For instance, Eric Prokopi, a self-proclaimed commercial paleontologist, received a three-month jail sentence last year after he was convicted of smuggling fossils out of Mongolia and into the United States, Live Science reported. And in December, actor Nicolas Cage agreed to return a 70-million-year-old skull of a Tyrannosaurus bataar — one that had been purchased at an auction — to the Mongolian government.

Going forward, it's crucial that researchers know the provenance of each fossil, including who collected the fossils and whether all the laws were followed, Brusatte said.

"In the past, I think fossils slipped through the cracks," he said. "But now because fossils can be so high-profile, museums and governments are taking them much more seriously."

Computer modeling and quantitative techniques are advancing the field, allowing researchers the ability to determine how dinosaurs moved and used their senses, but it's also changing the daily lives of paleontologists.

"You have a lot of paleontologists now who just specialize in these things," Brusatte said. "Now you have people who never go out into the field to collect fossils or never describe fossils. And, of course, that's perfectly fine, it's just that the field is diversifying and there's different niches for different scientists."

In fact, Farke said he expects to see a wave of scientists modeling living animals, and then transferring that virtual knowledge to how dinosaurs lived during the Mesozoic era, which includes the Triassic, Jurassic and Cretaceous periods.

5. Diversity in the field

Dinosaurs are a diverse bunch, but those who study them tend to be a little more uniform. In the coming years, Farke expects to see a more diverse crowd studying the beasts. [Gallery: The Diversity of Dino Ancestors]

"Even 20 or 30 years ago, you'd have a cool fossil from a country where maybe there wasn't a big scientific infrastructure," Farke said. "So paleontologists from the United States or United Kingdom would come in and describe the fossil, maybe without any participation from people in the infrastructure there."

Now, diversity is growing, he said.

"It's been really exciting to see the growth of the paleontology in Argentina, China, South Africa and Kenya — places where's there's always been a lot of paleontological resources, but now there's some awesome scientists there," Farke said. "It's an international field and it's good to see that actually coming to fruition."