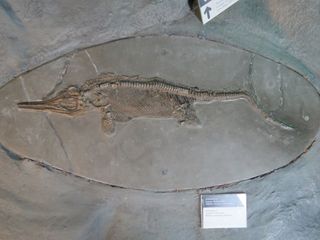 The fossilized skeleton of an ichthyosaur that is from a currently valid species but has never before been reported from the village of Street in southwestern England.
(Image: © Amgueddfa Cymru | National Museum, Wales)

Update (Oct. 10 at 4:25 p.m. ET): Since the presentation on their initial results at the Society of Vertebrate Paleontology meeting in 2015, the researchers have discovered two newfound species of ichthyosaur among the Somerset specimens. The two newly named species, Ichthyosaurus larkini and Ichthyosaurus somersetensis, are more closely related to each other than to other species in the genus, according to an analysis of their remains. Moreover, the findings bring the number of species within the Ichthyosaurus genus to six, according to the study, which was published online on Thursday, Oct. 6, 2016, in the journal Papers in Palaeontology.

A group of ancient "sea monsters" is caught up in a centuries-old case of mistaken identity, according to new research.

During the early 1800s, quarry workers in Street, a village in southwestern England, discovered hundreds of marine-reptile skeletons embedded in the rocks. The era of fossil collecting had just begun, and scientists named the ancient marine reptiles "ichthyosaurs," which is Greek for "fish lizards."

"There were some rich gentry in the area who would buy them from quarrymen, prepare them and put them in these big wooden frames," said study co-researcher Judy Massare, a professor of geology at SUNY College at Brockport in New York. [Image Gallery: Photos Reveal Prehistoric Sea Monster]

At the time, fossil experts assigned the Street specimens to the same species — Ichthyosaurus communis, a common species found in rock layers dating to the Late Triassic and Early Jurassic periods in Street, as well as elsewhere in the United Kingdom. Over time, many of these fossils ended up in U.K. museums, though some private collectors kept them, including the Clarks family, of Clarks Shoes, Massare said.

The project began when Dean Lomax, a paleontologist at the University of Manchester, found an ichthyosaur skeleton in the collections of the Doncaster Museum and Art Gallery in the United Kingdom.

An analysis by Lomax and Massare revealed that the 189-million-year-old specimen was a new species of ichthyosaur. For instance, it was considerably smaller in body length than Ichthyosaurus communis and larger than Ichthyosaurus conybeari, the researchers noted. They named it Ichthyosaurus anningae, in honor of Mary Anning, a British fossil collector who, in 1811, found the first ichthyosaur to be scientifically described.

If one museum had a newfound species of ichthyosaur, the researchers wondered, what about other museum collections?

So, they focused on the ichthyosaurs from Street, and located 16 well-preserved partial to nearly complete skeletons from museums and collectors, including the Clarks. An ongoing analysis suggests that many of the specimens were mislabeled, with the group containing at least three, and probably four, ichthyosaur species, Massare said.

Some of the ichthyosaurs belong to two known species groups, she said. Others appear to belong to a species described in the 1800s that some researchers do not consider to be a distinct species, but further analyses will likely clear this up, Massare said.

Finally, one of the ichthyosaurs might be a newly identified species, but more work is needed to say for sure, Massare said.

"What we're finding is, one species that we used to think was extremely variable only looks variable because we were combining a couple of other species," she said. "We're now trying to figure out the boundaries between those different species."

For instance, differences in tooth and forefin shape suggest that these species ate different prey and had different swimming capabilities, the researchers said.

Ichthyosaurus communis, once thought to be widespread in Street, is actually not so common, the researchers said.

"With the recognition of these species, at least seven species of Ichthyosaurus are found in the Lower Jurassic strata [rock layer] of the United Kingdom, making it the most diverse ichthyosaurian genus of that time interval," they wrote in the abstract for their presentation of the unpublished findings at the 75th annual Society of Vertebrate Paleontology conference, held in Dallas in October.