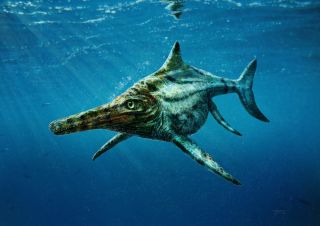 A prehistoric marine-reptile fossil found in Scotland's Isle of Skye represents a new species that lived about 170 million years ago, a new study finds.

The specimen was a member of a group of extinct marine reptiles called ichthyosaurs. Researchers say the creature helps to fill in a gap in the fossil record during the Middle Jurassic period, which lasted from about 176 million to 161 million years ago.

"It's one of a select few specimens of that age in the world," said Stephen Brusatte, a paleontologist at the University of Edinburgh and co-author of the study, published today (Jan. 12) in the Scottish Journal of Geology. Not only that, but "this is the first time we have something distinctly Scottish," Brusatte added. [Image Gallery: Photos Reveal Prehistoric Sea Monster]

Ichthyosaurs were predatory reptiles that ruled the oceans during the time of the dinosaurs, before large sharks and whales came on the scene. The first ichthyosaurs ever discovered were found in England, and some of the same kinds of rocks where fossils of these animals were found exist in Scotland, Brusatte told Live Science. Researchers suspected the fossils were there, and bits and pieces had been found, but no ichthyosaur fossils were reported in Scotland until now.

The specimens in the study were found by an amateur fossil collector named Brian Shawcross. Instead of taking the specimen home, Shawcross donated it to a museum, Brusatte said. The new species — Dearcmhara shawcrossi — is named after him, as well as a Gaelic word for "marine lizard" (dearcmhara).

Brusatte and his colleagues found that the fossils contained the arm bone and vertebrae of a new ichthyosaur genus and species. The marine creature was likely about 14 feet (4.3 meters) long, or about the size of a motorboat, Brusatte said.

"It's not the most beautiful specimen in the world," he said. "If it was found somewhere [besides Scotland], people might not have looked at it very closely."

Sometime during the Middle Jurassic, ichthyosaurs experienced a major global turnover. Smaller ichthyosaurs gave way to larger, more advanced ones, and nobody knows why. The smaller ones went extinct, whereas the larger reptiles dominated the seas until the creatures went extinct by about 95 million years ago, in the early stages of the Late Cretaceous period.

The new species was a smaller ichthyosaur, but it helps flesh out the fossil record during the Middle Jurassic, Brusatte said.

In addition to D. shawcrossi, the researchers found teeth that could be from the ichthyosaur species Ichthyosaurus communis, which was found to be widespread in the limestone rocks on the southern coast of England.

Brusatte thinks more ichthyosaur fossils exist in Scottish museums and private collections, and he hopes to find them. "Amateur collectors are so important in this story," he said. "We need to work with them."