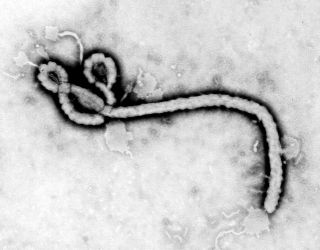 This image of a single vision of the Ebola virus was taken in 1976 using a transmission electron microscope, and reveals the virus's structure.
(Image: © Frederick A. Murphy / CDC)

Since the latest Ebola outbreak began, researchers have renewed their search for an effective way to fight the deadly virus. Now, a new study finds that giving Ebola patients a drug that is currently used to treat malaria may lower their risk of dying from the virus by almost one-third. Meanwhile, a separate study finds that treating Ebola patients with blood plasma taken from Ebola survivors does not lower their risk of death.

Together, the findings show that when it comes to finding effective treatments for Ebola, there are still a lot of unknowns, and therefore, prevention and vaccine development remain key, experts say. Both findings are published online today (Jan. 6) in the New England Journal of Medicine.

Even the malaria drug that was shown to be effective in one of the two new studies "is unlikely to be a magic bullet," said Dr. Iza Ciglenecki, of Doctors Without Borders, who co-authored the study that examined the efficacy of the malaria drug for Ebola treatment.

"After two years of the largest Ebola epidemic, and despite several promising therapeutic candidates, we still lack good evidence that any of these drugs work," Ciglenecki said. "Several clinical trials took place towards the end of the epidemic, with few promising results to date." [Where Did Ebola Come From?]

Malaria drugs are frequently given to people with Ebola in Africa because of the high rate of malaria there — it is thought that the drugs may help fight malaria if a patient has both Ebola and malaria, or they may prevent an Ebola patient from getting malaria and worsening the patient's condition.

The researchers found that 51 percent of the patients who were given artesunate–amodiaquine died, whereas about 64 percent of patients given artemether–lumefantrine died.

This translates to a 31 percent lower risk of death in the patients who took artesunate–amodiaquine, compared with those who took the other drug.

However, more research is needed to confirm these results, the researchers said. It is possible, for example, that taking the other drug, artemether–lumefantrine, may increase patients' risk of death, which could affect the interpretation of the results. It is also possible that the patients who were given artesunate–amodiaquine had some unmeasured characteristics that altered their risk of death, the researchers noted.

In the other new study, 84 patients with Ebola received two consecutive transfusions of 200 to 250 milliliters (6.76 to 8.45 fluid ounces) of plasma from Ebola survivors. (Plasma is the liquid part of blood; it is devoid of blood cells but contains disease-fighting antibodies.) A control group of 418 patients was not given plasma transfusions.

It turned out that the plasma did not lower patients' risk of dying from the disease compared with the control group.

One limitation of the study was that the researchers could not determine the levels of Ebola-neutralizing antibodies in the plasma before it was administered to the patients, and these levels may be important for the efficacy of the treatment, the researchers said.

"For the time being, we can only conclude that the way plasma was given in this study — as per WHO guidance — and without knowing the level of antibodies that neutralizes the virus, did not show the pronounced effect on mortality we hoped for, on average, for all patients together," said study co-author Dr. Johan van Griensven, of the Institute of Tropical Medicine in Antwerp, Belgium.

"Once we have this antibody-level data, it remains possible that further analysis would show that those who received high levels of antibodies have benefited," van Griensven said.

The results of the plasma study are hard to interpret, as the quality and quantity of antibodies in the individual batches of blood that was administered to patients was "probably all over the map," said Kartik Chandran, an associate professor of microbiology and immunology at Albert Einstein College of Medicine in New York, who was not involved in either of the two studies.

Overall, research conducted thus far has suggested that the administration of antibodies could be protective against Ebola, and that antibodies "are to be strongly considered as a kind of frontline therapy against Ebola," Chandran told Live Science.

"But I would say the jury is still out on all of it, because there is not much data available from human clinical trials in terms of efficacy, so it is very hard to know," he said. [The 9 Deadliest Viruses on Earth]

One approach to preventing Ebola is a vaccine called ZMapp, which contains a cocktail of antibodies that fight the virus. In tests done on monkeys, ZMapp was given to the animals up to five days after they were infected with the virus, and results showed that the monkeys recovered from the infection, Chandran said.