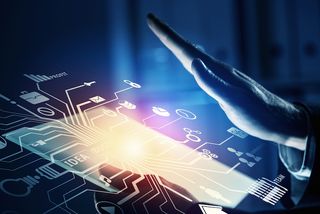 The world's most dire problems, such as climate change and global conflicts, could be solved using a combination of human and computer intelligence, researchers say.

Human outperform machines at many tasks, such as recognizing images and thinking creatively. So, with the help of computers, crowds of people could collaborate in networks to achieve what neither people nor computers could do alone, a growing field known as human computation.

"What's most exciting to me about human computation is that it gives us hope today," said Pietro Michelucci, director of the Human Computation Institute in Fairfax, Virginia. Although many people have pinned both their hopes on artificial intelligence (AI), or super-intelligent machines, human computation provides an alternate view, he said.

By using today's technology to combine humans and machines, human computation could achieve sooner what AI might achieve only in the distant future, Michelucci said. And, "with the integral involvement of humans in these systems as both participants and stakeholders, we can better ensure that we remain in control," he said.

One notable example of human computation is reCAPTCHA, an online widget used by about 100 million people daily when they transcribe distorted text into a box to prove they are human in order to access online content. This act of transcribing collections of letters has helped power efforts that have digitally transcribed 13 million articles from The New York Times archives.

Most of today's human-computation systems rely on doling out small "micro tasks" to many people and then merging the results together. For instance, 165,000 volunteers in 145 countries have used the EyeWire platform to analyze thousands of images online and help build the world's most complete map of the neurons in the human retina, which is the tissue in the back of the eye that detects light and enables people to see.

However, as effective as micro tasking has proven to be, this strategy alone cannot address so-called "wicked problems" such as climate change and global conflicts, experts said. [10 Technologies That Will Transform Your Life]

"Wicked problems are wicked because they have many interacting parts [and] unpredictability, and because we don't understand how the different parts feed back on each other," said Janis Dickinson, professor and director of citizen science at the Cornell Lab of Ornithology in Ithaca, New York. Michelucci and Dickinson analyzed the latest research in human computation in an article published in the Jan. 1 issue of the journal Science.

And trying to solve wicked problems can have unforeseen and unwanted consequences — for instance, giving financial aid to a country after a natural disaster can lead to corruption that can actually stymie relief efforts, the researchers said.

Now scientists are envisioning ways in which human computation might tackle such complex problems.

"The key to addressing wicked problems is to create a working model, [a] computer simulation, of all of the interacting systems that pertain to a given problem," Michelucci told Live Science. "Imagine something like the game SimCity, but a thousand times more detailed. Then link in real-time sensors attached to the Internet. The more faithful the model is to the real world, the more accurate it will be for testing out solutions and predicting outcomes."

Imagine an online system that feeds this working model of the world "with knowledge from real people, where a doctor can input diagnostic methods, a mechanic can describe how a piston works, and farmers in every region of the world can provide local updates about agricultural pests," Michelucci said. "A working model of the world that pristine requires working knowledge that may be spread across the minds of thousands or millions of people, books, electronic documents and data sets."

This strategy for tackling wicked problems requires not only the constant gathering of data from the real world, but also the use of multistep reasoning. Under this method, each problem gets broken down or "decomposed" to many simpler parts that are easier to address.

New human-computation technologies might help make this a reality;  recent techniques allow contributions from people to get processed by a computer and then sent to others for improvement or analysis of a different kind, the researchers noted. [9 Odd Ways Your Tech Devices May Injure You]

For instance, YardMap.org was launched in 2012 to map global conservation efforts one parcel of land at a time, and it allows participants to interact and build on each other's work, something that crowdsourcing alone cannot achieve. Other examples of multistep reasoning were seen in the Polymath Project, which helped prove an 80-year-old mathematical theorem, and the ePluribus Problem Solver, which generated a factually accurate and well-constructed journalistic article based on just a handful of photographs. In both cases, diverse participants worked together to generate solutions.

Creating a working model of the world to handle wicked problems also requires creative thought in order to see how wicked problems might evolve in response to attempted solutions, Michelucci said.

"We can draw on human computation methods for stimulating innovation, eliciting new ideas, spreading them around and giving people the opportunity to build on each other's work," Michelucci said. "Of course, all this has to be fun, easy and quick, so that millions of people actually choose to participate."

"The first step might be to elicit broad solution classes from human participants, such as halting climate change or adapting to it," Michelucci said.

"Then, each of those [solution classes] might be further delegated to humans for decomposition — 100 people might receive the task of decomposing 'halt climate change' into two subclasses, such as 'biological solutions' and 'physical solutions.' Each proposal is then sent by the computer to 100 more people who evaluate it on various dimensions.

Then, each of these ideas would be sent out to 100 more people, who might break them down further or propose specific solutions, like 'paint our roofs white to reflect sunlight back into the atmosphere.'

"Ideas would then propagate through the system through various stages of vetting and modification," Michelucci said. At any stage, experts could step in to help explain complex problems in plain English.

Michelucci and Dickinson noted that human computation will need many improvements before it could tackle wicked problems. For example, in most human-computation efforts, only a small number of participants do most of the work, Michelucci and Dickinson said, adding that researchers want to find ways to maximize recruitment and contributions of participants.

"There are many questions about how people behave in human-computation systems that must be resolved before we can think really big about their use in humanitarian efforts or disasters or monitoring and addressing problems arising with chronic environmental change," Dickinson told Live Science. Moreover, Michelucci and Dickinson cautioned that researchers needed to consider what human computation may mean for the labor force, unemployment rates, and the economy, so that people who contribute to human computation projects are protected from exploitation.

But crowdsourced efforts such as Wikipedia and crowdfunding platforms such as Kickstarter highlight the massive potential that human cooperation has for solving problems, Dickinson said.

"There are huge social benefits to cooperation that have largely been overlooked — think of reputation and reciprocation or lack thereof," Dickinson said. "By providing the right kinds of information about our cooperative efforts and where we stand as cooperators, human-computation systems can provide unprecedented support for people to help work on large problems that require large-scale human effort to solve."