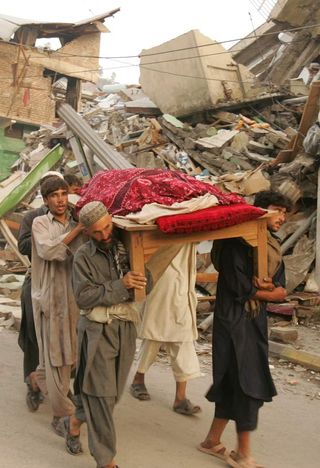 People carry the dead body of a man who was killed by Saturday's heavy earthquakethat jolted Muzaffarabad, capital of Pakistani Kashmir, Sunday, Oct. 9, 2005. Bodies lay in the streets and villagers pulled debris from collapsed schools and mud-brick homes with their bare hands on, desperate to find survivors from a huge earthquake that struck Pakistan, India and Afghanistan. AP Photo/B.K.Bangash

Earth might seem like a more active and dangerous place than ever, given the constant media reports of multiple natural disasters recently. But a broader view reveals that it's not Mother Nature who's changed, but we humans.

Drawn by undeveloped land and fertile soil, people are flocking to disaster-prone regions.

This creates a situation in which ordinary events like earthquakes and hurricanes become increasingly elevated to the level of natural disasters that reap heavy losses in human life and property.

Meanwhile, in any given year, the death toll at the hands of Mother Nature varies greatly, as do the sorts of major deadly events.

Of the estimated 61,000 people who have died this year due to natural disasters, about 50,000 (according to today's estimate) were victims of the 7.6 earthquake that struck Pakistan Oct. 7. In 2004, by contrast, more than 60 percent of the total natural disaster deaths were caused by the tsunami in the Indian Ocean.

So far, the distribution of natural disasters for 2005 is similar to that of 2004, said Debarati Guha-Sapir, director of the Center for Research on Epidemiology of Disasters (CRED) in Brussels, Belgium. However, Guha-Sapir cautioned that it is still premature to make direct comparisons between the two years, noting that the Dec. 6 tsunami that struck Indonesia and which killed 130,000 people.

THE DETAILS: Annual Deaths by Type of Disaster

Other natural disasters for 2005 that have resulted in a major loss of life include:

All of these numbers pale greatly in comparison to deaths caused every year by war, famine and communicable diseases.

Along with the Office of US Foreign Disaster Assistance (OFDA), CRED maintains an emergency disaster database called EM-DAT. An event is categorized as a natural disaster if it kills 10 or more people or leaves at least 100 people injured, homeless, displaced or evacuated. An event is also included in the database if a country declares it a natural disaster or if requires the country to make a call for international assistance.

According to the EM-DAT, the total natural disasters reported each year has been steadily increasing in recent decades, from 78 in 1970 to 348 in 2004.

Guha-Sapir said that a portion of that increase is artificial, due in part to better media reports and advances in communications. Another reason is that beginning in the 1980s, agencies like CRED and the US Agency for International Development (USAID) began actively looking for natural disasters.

"Like in medicine, if you go out into a village and look for cases you find much more than if you just sit back and let people come to you when they're sick," Guha-Sapir said.

However, about two-thirds of the increase is real and the result of rises in so-called hydro-meteorological disasters, Guha-Sapir said. These disasters include droughts, tsunamis, hurricanes, typhoons and floods and have been increasing over the past 25 years. In 1980, there were only about 100 such disasters reported per year but that number has risen to over 300 a year since 2000.

In contrast, natural geologic disasters, such as volcanic eruptions, earthquakes, landslides and avalanches have remained steady in recent decades.

Scientists believe the increase in hydro-meteorological disasters is due to a combination of natural and made-made factors. Global warming is increasing the temperatures of the Earth's oceans and atmosphere, leading to more intense storms of all types, including hurricanes.

Natural decadal variations in the frequency and intensity of hurricanes are also believed to be a contributing factor, as are large-scale temperature fluctuations in the tropical waters of the Eastern Pacific Ocean, known as El Niño and La Niña.

People are also tempting nature with rapid and unplanned urbanization in flood-prone regions, increasing the likelihood that their towns and villages will be affected by flash floods and coastal floods.

"Large land areas are [being] covered with cement so this means the flow of water becomes very strong," Guha-Sapir said. "The runoff from the water can't get absorbed by the soil anymore, so it keeps collecting and rushing down, getting heavier and faster, and then you have much bigger floods."

People aren't just putting themselves at risk for floods, but for natural disasters of all types, including earthquakes and storms like hurricanes and typhoons.

"As you put more and more people in harms way, you make a disaster out of something that before was just a natural event," said Klaus Jacob, a senior research scientists at Columbia University's Lamont-Doherty Earth Observatory.

According to the World Bank's "Natural Disaster Hotspots: A Global Risk Analysis" report released in March, more than 160 countries have more than a quarter of their populations in areas of high mortality risks from one or more natural disasters. Taiwan was singled out as being the place on Earth most vulnerable to natural disasters, with 73 percent of it's land and population exposed to three or more threats.

The good news is that the number of deaths from natural disasters has decreased substantially in recent decades thanks to better disaster preparedness and prevention programs. But this statistic is tempered by the fact that more people are being injured, displaced or left homeless.

"If you don't die you need care," Guha-Sapir said. "To a certain extent we prevent people from dying but more and more people are affected."