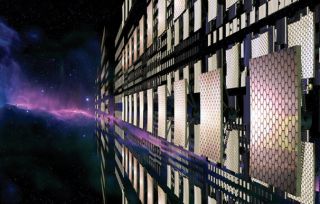 The record-breaking temperatures of the past few years are getting more people thinking about bigger solutions to climate change. Ideas once thought of as wacky are now receiving careful consideration, including an idea that sounds straight out of science fiction: cooling the earth by launching reflective mirrors into space.

Lowell Wood of Lawrence Livermore National Laboratory proposed a giant space mirror in the early 2000s, though he cautioned that the mirror should be considered only as a measure of last resort. Why? Because the mirror would have to have an area of 600,000 square miles – a slightly smaller area than Greenland – and launching something that big would be prohibitively expensive. Another option: billions of smaller mirrors. Roger Angel, researcher and optics expert at the University of Arizona, proposed that idea in 2006.

In either case, the mirror or mirrors would orbit at Lagrange point L1, a gravitationally stable point between the Earth and the sun that's about four times the distance from the Earth to the moon. The mirrors would barely be visible from Earth and would block just 1 percent to 2 percent of the sun's light, but that would be enough, advocates of the schemes say, to cool the planet. Even with Angel's plan, the current cost of launching a trillion mirrors would be $10,000 per pound, or, in total, 26 times more than the current U.S. national debt.

A nightmare to maintain

Another option was proposed in 2002 by space consulting firm Star Technology and Research. Star's experts calculated that a network of steerable space mirrors orbiting Earth's equator, like one of the rings of Saturn, could lower the average air temperature by up to 3 degrees Celsius (5.4 degrees Fahrenheit) while simultaneously generating power from onboard solar panels and beaming it to Earth.

But such an approach could generate problems. Report author and Star Technology president Jerome Pearson calculated it would take 5 million spacecraft to achieve the desired result, and even if each individual craft could last 100 years, that means 137 ships would have to be replaced or repaired per day. And the craft would produce "stars" that would be visible from the ground. (Pearson's other hypothetical proposal, a ring of reflective rocks in the same position, would light the night sky with the equivalent of 12 full moons.)

Even if a space mirror scheme was technically and financially feasible, it could result in unintended consequences, like drought. A recent study from the Max Planck Institute for Meteorology added the effect of space mirrors to four climate models. In each model, the space shades lowered the average global temperature to preindustrial levels, but unevenly. The poles warmed while the tropics cooled, fewer clouds formed, and the planet received less rainfall, especially in the Americas and northern Eurasia.

Such a plan also would do nothing about ocean acidification and little about sea-level rise, since sea levels respond slowly to changes in Earth's temperature. A space mirror could offset air temperature warming until at least 2070, according to a 2010 Proceedings of the National Academy of Sciences paper, but the oceans would still rise by two feet in that time.

Aggressive carbon reductions coupled with a space reflector could limit sea level rise to one foot by 2100, and stopping it completely would require a mirror that was constantly getting larger and more efficient at blocking sunlight.

While a giant space mirror isn't currently possible with today's tools, technology is in fact catching up to science fiction, and the idea seems less outlandish than it did a decade ago. Will an enormous mirror someday be the world's last hope to stop global warming? Only time will tell.

Editor's Note: The original version of this story incorrectly stated that a relative change of 3 degrees C is equal to 37 degrees F. The correct conversion is 5.4 degrees F.