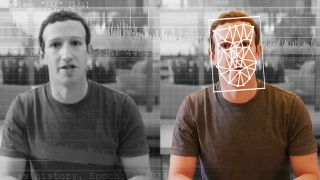 Deepfake AI makes it difficult to distinguish between an altered video and the original. Here's a comparison of an original and deepfake video of Facebook CEO Mark Zuckerberg.
(Image: © Elyse Samuels/The Washington Post via Getty Images)

Of all the scary powers of the internet, it's ability to trick the unsuspecting might be the most frightening. Clickbait, photoshopped pictures and false news are some of the worst offenders, but recent years have also seen the rise of a new potentially dangerous tool known as deepfake artificial intelligence (AI).

The term deepfake refers to counterfeit, computer-generated video and audio that is hard to distinguish from genuine, unaltered content. It is to film what Photoshop is for images.

How does deepfake AI work?

The tool relies on what's known as generative adversarial networks (GANs), a technique invented in 2014 by Ian Goodfellow, a Ph.D. student who now works at Apple, Popular Mechanics reported.

The GAN algorithm involves two separate AIs, one that generates content — let's say, photos of people — and an adversary that tries to guess whether the images are real or fake, according to Vox. The generating AI starts off with almost no idea how people look, meaning its partner can easily distinguish true photos from false ones. But over time, each type of AI get progressively better, and eventually the generating AI begins producing content that looks perfectly life-like.

Related: Read the latest news and features on artificial intelligence.

GANs are impressive tools and aren't always used for malicious purposes. In 2018, a GAN-generated painting imitating the Dutch "Old Master" style of artists like the 17th-century Rembrandt van Rijn sold at Christie's auction house for an incredible $432,500.

But when GANs are trained on video and audio files, they can produce some truly disturbing material. In 2017, researchers from the University of Washington in Seattle trained an AI to change a video of former president Barack Obama, so that his lips moved in accord with words from a totally different speech. The work was published in the journal ACM Transactions on Graphics (TOG).

That same year, deepfakes rose to widespread prominence, mainly through a Reddit user who went by the name 'deepfakes,' Vice reported. The GAN technique was often being used to place the faces of famous celebrities – including Gal Gadot, Maisie Williams and Taylor Swift – onto the bodies of pornographic-film actresses.

Other GANs have learned to take a single image of a person and create fairly realistic alternative photos or videos of that person. In 2019, a deepfake could generate creepy but realistic movies of the Mona Lisa talking, moving and smiling in different positions.

Related: Why Does Artificial Intelligence Scare Us So Much?

Deepfakes can also alter audio content. As reported by The Verge earlier this year, the technique can splice new words into a video of a person talking, making it appear that they said something that they never intended to.

The ease with which the new tool can be deployed has potentially frightening ramifications. If anyone, anywhere can make realistic films showing a celebrity or politician speaking, moving and saying words they never said, viewers are forced to become more wary of content on the internet. As an example, just listen to President Obama warning against an "effed-up" dystopian future in this video from Buzzfeed, created using deepfake by filmmaker Jordan Peele.