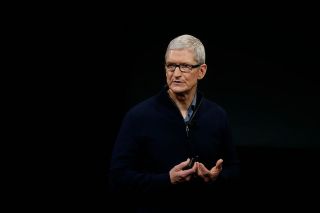 Apple has spent years working on a car project that has been kept shrouded in secrecy — until now.

During an interview with Bloomberg, Apple CEO Tim Cook said the auto industry is experiencing disruption from three avenues: electric cars, ride-sharing companies and self-driving technology. And driverless cars, Cook revealed, is something that Apple has been focusing on. Cook said the artificial intelligence (AI) behind autonomous systems is an important "core technology" for the company moving forward.

"We're focusing on autonomous systems, and clearly one purpose of autonomous systems isself-driving cars [but] there are others," Cook told Bloomberg. "And we sort of see it as the mother of all AI projects — it's probably one of the most difficult AI projects actually to work on." [Photos: The Robotic Evolution of Self-Driving Cars]

Though Cook did not say what will come from the AI project in terms of future products, he noted that autonomy in general is "incredibly exciting" for Apple.

Many companies in Silicon Valley and beyond are refining autonomous vehicle technologies, ranging from Tesla's auto-pilot mode to the robotic car challenge put on by the U.S. military's Defense Advanced Research Projects Agency (DARPA).

One recently announced self-driving system comes in the form of a portable robot chauffer. The IVO (short for intelligent vehicle operator) uses cameras, motion sensors and a few mechanical devices to depress the brakes and turn the steering wheel.