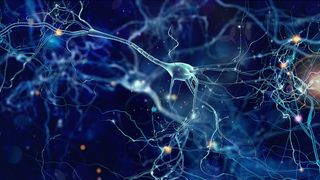 Heads up, humanity. Artificial intelligence may be about to get a lot smarter.

In this context, synapses serve as a gateway for neurons, whether synthetic or biological, to pass information and signals to one another. They're the connective tissue in both biological and artificial neural networks. It's estimated that the typical human nervous system contains more than 100 trillion synapses.

While scientists have had remarkable success with artificial neural networks, contemporary AI systems have been stymied by a specific limitation. In the mammalian brain, synapses can accommodate two types of signals — inhibitory and excitatory — simultaneously. But artificial synapses, made from nanoscopic electronic components, can only process one type of signal at a time. As a result, AI systems can only run at half throttle.

US and Chinese researchers have developed a synthetic synapse that can handle both kinds of signals, reconfiguring itself on the fly, according to new research published this week in the journal ACS Nano. Funding for the project was provided by the National Science Foundation and the Army Research Office.

"These new artificial synapses allow the same synapse to be reconfigured into either excitatory or inhibitory modes, which was not previously possible in solid state artificial synaptic devices," said co-author Han Wang, of the University of Southern California. "This new functional flexibility is important for enabling more complex artificial neural network that can also dynamically reconfigure just like our brain does."

RELATED: Meet the Engineer Behind the Web's Most Viral AI Neural Network

This kind of biological emulation is critical for the development of next generation cognitive abilities in artificial neural networks.

You'd need a Ph.D or three to really wrap your head around it all, but Wang suggest an automotive metaphor.

"It is just like one is the accelerator and the other is the brake, and the two work together to ensure the proper functions and stability of the brain activities — the car," Wang said. "It is closer to what the biological brain can do."