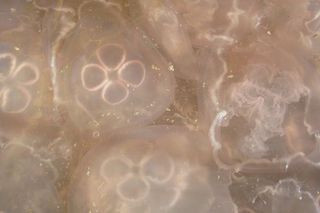 In the Gulf of Mexico's giant jellyfish swarms, there can be more jellyfish than water.
(Image: © Monty Graham, University of Southern Mississippi )

Ghoulishly thick jellyfish swarms — some of which may extend up to 100 miles — commonly form in the Gulf of Mexico during the summer. The accompanying video features one-of-a-kind footage of such swarms .

In the video's narration, jellyfish expert Monty Graham of the University of Southern Mississippi discusses human activities — including the dumping of aircraft carriers, military tanks, bridges and other debris, and overfishing  — that help promote such swarms. Other factors, including climate change figure into the Gulf's explosions of jellyfish populations   as well, he says.

Graham's research focuses on several areas including marine zooplankton, ecological implications of fishing and climate change in river-dominated systems and the long-term ecosystem dynamics in pulsed river coastal environments. He has researched jellyfish and the ecology of the Gulf of Mexico with NSF funding.