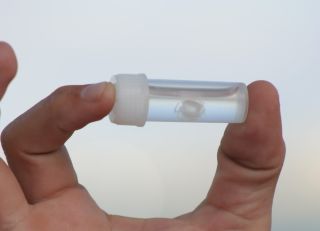 A diminuitive Irukandji jellyfish caught off the coast of Queensland, Australia.
(Image: © GondwanaGirl, via Wikimedia.)

The key to predicting the presence of tiny, venomous and nearly invisible jellyfish may be blowing in the wind, new research finds.

The discovery, linking the appearance of teeny-tiny jellies off the coast of Australia with wind patterns, could lead to a way to prevent stings, researchers report today (May 13) in the Journal of the Royal Society Interface. Closing beaches 31 percent of the time, when winds are inauspicious, could reduce the number of stings by more than 61 percent, they wrote.

The tiny jellies, called Irukandji jellyfish, are transparent, and their bodies are so miniscule that they're practically undetectable in the ocean. The largest species have bodies only about an inch (2.5 centimeters) wide, while the smallest are just a quarter of that size. [See Gorgeous Photos of Jellyfish Blooms]

An initial Irukandji sting may be nearly imperceptible, but the toxin can induce an illness called Irukandji syndrome, which includes muscle aches, abdominal pain, nausea, vomiting, a racing heart, high blood pressure and fluid buildup in the lungs. The syndrome is often accompanied by an acute sense of anxiety, and patients may feel they are doomed. In rare cases, the syndrome is fatal.

In Australia, about 50 to 100 people are hospitalized each year for Irukandji syndrome, and two people died from stings in the Great Barrier Reef in 2002. This danger has a ripple effect on tourism and local economies, Lisa-ann Gershwin, a scientist at the Commonwealth Scientific and Industrial Research Organization in Australia, and her colleagues wrote in the new study.

Local lore has long held that stings are most common when northeasterly winds are low. Gershwin and her colleagues decided to test that notion, comparing records of sting times and locations with wind estimates between January 1985 and August 2012.

Their results revealed that the locals are partly right. Winds do affect the risk of Irukandji stings. In fact, the highest risk comes not when northeasterly winds are low, but when the southeasterly trade winds drop off temporarily (a related phenomenon).

Next, the researchers plotted out the results of using the winds as a way to inform beach closures. They found that closing beaches in response to a decline in southeasterly wind speeds would have prevented some stings.

The strength of the effect, of course, depends on how conservative officials are about closing beaches. For example, closing the beach for a single day when the winds revert from southeasterly to northeasterly would require shutting down beaches 31 percent of the time and would reduce the number of days with stings by 61 percent. (Jellies sting more than one swimmer about a third of the days when someone is stung, so the total number of injuries prevented would be higher.) Closing the beaches 64 percent of the days would cut down the number of days with stings to 90 percent.

Southeasterly winds produce lots of turbulence near the shore and also cause downwelling, pushing water offshore. Jellies are drifters, so they're unlikely to fight the current, the researchers wrote; thus, when the southeasterly trade winds are strong, Irukandji jellyfish likely go with the flow, away from beachgoers. When the winds are low, turbulence and downwelling decrease, allowing more jellies to drift toward shore. Sea breezes, which blow from the ocean inland, likely enhance this landward movement.