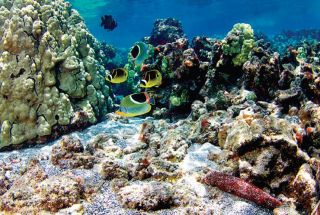 The health of the world's oceans are inextricably linked to human health and well-being; more than one-third of people worldwide depend on seafood for 20 percent of their animal protein, according to the United Nations.

To gauge how well the oceans are doing, a large team of researchers created a wide-ranging measure of the oceans' health. Yesterday (Oct. 15), the second annual edition of the Ocean Health Index was released, which shows that unsustainable fishing has taken a toll on fish populations around the world, putting many people's food security at risk, said Ben Halpern, a marine biologist at the University of California, Santa Barbara, and the project's lead scientist.

The index ranks the health of the oceans in 10 different categories, including subjects like purity of water and levels of tourism, on a country-by-country basis. This year the world's oceans scored a 65 out of 100 possible points, unchanged from when it was first released last year, Halpern told LiveScience. While it could be worse, the score suggests there's "definite room for improvement," he said.

The index's category of "natural products" — a measure of how well humans sustainably use non-food ocean products such as fish oil, sponges, ornamental fish and coral products — received the lowest score this year, with a 31 out of 100, according to the index's website. The low score is an indicator of overfishing, which takes fish and other ocean resources out of the ocean faster than they can be replenished, a statement from the index said. For this same reason, the category of food production also scored low, a 33. [Video: Humans Hit the Oceans Hard]

The index also found that many countries have less natural protection from storms and hurricanesthan they did several decades ago, with a number of these are in the annual path of tropical cyclones, according to the index.

Halpern said the index has helped him visualize and integrate many disparate aspects of the world's oceans into a single whole. "It was really transformative in how it helped me understand the oceans [and] gives me far deeper insight into what is doing well and what isn't when it comes to improving the oceans' health," Halpern said.

Halpern and colleagues have worked on the index for more than six years, and at different times up to 20 scientists have been employed full time. The plan is to update the index every year, to see how patterns change over time. For instance, in the span of one year certain changes have popped up; for example, increased pollution in Eastern European countries has reduced several countries' scores, Halpern said.

Not all ocean scientists are finding the index useful, though.

Jake Rice, chief scientist with Fisheries and Oceans Canada, told LiveScience he was "cautiously positive about it" when the index first came out last year. Since then, however, he thinks that the index has gotten too complicated, in part due to criticisms that it was oversimplifying. "Now it's harder to interpret what the values mean," he said.

Rice also said that the index appears to be unduly affected by countries' economies and relative isolation, and that values aren't likely to change much from year-to-year. For that reason, the index may say more about static or slowly changing aspects of each country — such as the geography and economy — than about the relative health of the ocean in each area. And because of this, a yearly update provides little value for a lot of effort, he added.

That said, over longer time scales, it could help show trends in ocean health in different countries, Rice said.

Becky Goldburg, director of ocean science for the PEW Charitable Trusts, an environmental and public policy group, said the index helps to combine disparate information about the world's oceans and how conditions change over time. The focus on overfishing is apt, she said, since "it's certainly one of the major problems in ocean management."