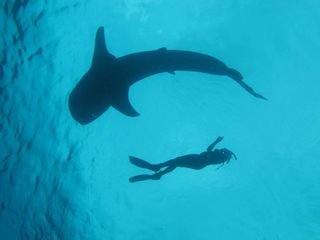 A whale shark and a diver.
(Image: © © Conservation International/photo by Sterling Zumbrunn)

In a new perspective on ocean health, one that looks through the lens of both humans and the natural world, scientists give Earth's seas a grade of 60 out of 100, meaning there's lots of room for improvement, they say.

The new index ranks oceans' health and the benefits they provide to humans using 10 categories, such as biodiversity, clean waters, ability to provide food for humans and support of the livelihood of people living in coastal regions.

In addition to assessing the present, the index provides a benchmark against which to measure progress in the future, writes the research team led by Benjamin Halpern at the National Center for Ecological Analysis and Synthesis in California.

The global score applies only to waters within countries' Exclusive Economic Zones, because sufficient data is not available for the high seas, they write. [Oceans & Us: A Gallery]

"The global score of 60 is a strong message that we are not managing our use of the oceans in an optimal way," study researcher Bud Ris, president and CEO of the New England Aquarium said in a statement. "There is a lot of opportunity for improvement, and we hope the Index will make that point abundantly clear."

Countries' individual scores ranged from 36 to 86, with the Atlantic coast of the west African nation Sierra Leone ranking the least healthy, while the protected Pacific waters around Jarvis Island, an uninhabited island designated a U.S. wildlife refuge ranked as the healthiest.

In general, developed countries performed better than developing nations, however, there were exceptions. Poland and Singapore scored poorly, 42 and 48, respectively, while some developing tropical nations, such as Suriname and Seychelles scored relatively well, at 69 and 73, respectively.

The scores on individual goals varied by country. Here are the 10 goals upon which the ranking is based:

1) Food provision: This goal refers to the amount of seafood a country catches or grows, all sustainably, from its waters.

2) Artisanal fishing: The opportunity for the small-scale fishing efforts that are particularly crucial in developing nations.

3) Natural products: The sustainable harvest of living, non-food natural products, such as corals, shells, seaweeds and fish for the aquarium trade. It does not include bioprospecting, oil and gas or mining products.

4) Carbon storage: The protection of three habitats, mangroves, seagrasses and salt marshes, which store carbon, keeping it out of the atmosphere and therefore mitigating global warming.

6) Coastal livelihoods and economies: Jobs and revenue produced from marine-related industry, alongside the indirect benefits of a stable coastal economy.

7) Tourism and Recreation: The value people place on experiencing and enjoying coastal areas, not the economic benefit which is included in coastal economies.

8) Clean waters: Whether or not waters are free from oil spills, chemicals, algal blooms, disease-causing pathogens, including those introduced by sewage, floating trash, mass kills of organisms and oxygen-depleted conditions.

9) Biodiversity: The extinction risk faced by species as well as the health of their habitats.

10) Sense of Place: Aspects that people value as part of their identity, including iconic species and places with special cultural value.

A description of the new index is published in Thursday's (Aug. 16) issue of the journal Nature.