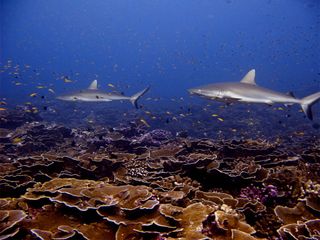 A healthy coral reef ecosystem with sharks off Jarvis Island, an uninhabited island located in the South Pacific Ocean. A loss of these large predators can alter the patterns of predation and herbivory, ultimately leading to an coral system where reef-building corals and coralline algae lose their competitive advantage.
(Image: © Brian Zgliczynski)

The loss of top predators, such as lions, wolves and sharks, is causing unpredictable changes to food chains around the world, according to a review written by 24 scientists.

These animals, called apex predators, play a crucial role in ecosystems, and their disappearance — often due to hunting by humans and loss of habitat — can lead to changes in vegetation, wildfire frequency, infectious diseases, invasive species, water quality and nutrient cycles, according to the authors led by James Estes, a professor of ecology and evolutionary biology at the University of California, Santa Cruz.

"The loss of apex consumers is arguably humankind's most pervasive influence on the natural world," the researchers conclude in a review published in the July 15 issue of the journal Science which examined findings from studies of ecosystems on land, in freshwater and in the ocean. [Images of These Predators]

The loss of these predators at the top of the food chain causes a cascade of effects down the line. The authors cite many examples, such as the decimation of wolves, which have since been reintroduced in Yellowstone National Park, led to over-browsing of vegetation by elk. The loss of lions and leopards in parts of Africa has led to changes in olive baboon populations and increased their contact with humans, which, in turn, has caused higher rates of intestinal parasites in both people and baboons. [Gallery: The World's Biggest Beasts]

“Predators have a huge structuring influence," said author Stuart Sandin of Scripps Institution of Oceanography at the University of California, San Diego, who has studied sharks' role in coral reef ecosystems. "When you remove them you change the biology, which is typically profound and complex. And in many cases it's not necessarily predictable."