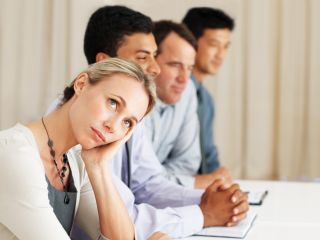 Boredom on the job might actually be a boon for creativity, especially if your tedious tasks leave room for daydreaming, researchers say.

In a recent study, researchers asked 80 people to come up with different uses for a pair of polystyrene cups. But before this assignment, half of the participants had been instructed to copy numbers out of a telephone book for 15 minutes. Those who completed this initial boring task tended to come up with more creative uses for the cups compared with the other participants, the researchers said.

In the second part of the study, 30 participants again copied out the telephone numbers, while another group of 30 was instructed to simply read the numbers instead of writing them out. The people who had just read the numbers came up with more creative uses for cups relative to those who had to write out the phone-book listings, the researchers found.

They said this suggests passive boring activities, like reading or perhaps attending meetings, can lead to more creativity compared with more active, albeit boring, tasks like writing, which might not hold the same creativity benefits of boredom. Researcher Sandi Mann, of the University of Central Lancashire in England, said this might be because more passive activities leave more space for daydreaming. (Past research has suggested daydreaming is good for the mind, giving a person's working memory — the mental work space that allows the brain to juggle multiple thoughts at once — a workout.)

"When we are bored, we search for stimulation and one way to do this is through daydreaming," Mann wrote in an email to LiveScience. She described daydreaming as a key factor in creativity that "allows us to reformulate problems and situations in our heads."

While workplace boredom is often seen as something to be eliminated, Mann said a small amount of downtime is probably very good.

"If life is too hectic and stimulating, creativity can be quashed," she wrote.

Further research is needed to find out where the creativity that seems to arise from boredom gets expressed, Mann said.

"Do people who are bored at work become more creative in other areas of their work — or do they go home and write novels?"

The research was presented Wednesday (Jan. 9) at the annual conference of the British Psychological Society Division of Occupational Psychology being held in Chester, England.