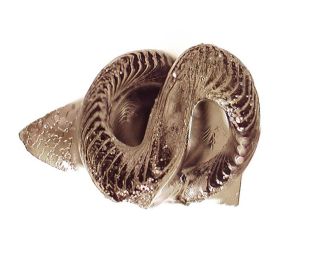 Strong, flawless ceramics in various shapes, including spirals and honeycombs, can now can be created using 3D printing, researchers say.

These new materials could find use in hypersonic aircraft and microscopic devices, scientists added.

Ceramics possess many useful qualities, such as high strength, high hardness and resistance to corrosion, abrasion and extreme heat. However, one shortcoming limits certain uses of ceramics — they aren't easily morphed into complex shapes. Unlike metals and plastics, ceramics cannot easily be poured into molds or pared down to a desired form.

One potential strategy for making ceramics that have complex shapes is 3D printing. A 3D printer usually works by depositing layers of material, just as ordinary printers lay down ink, except 3D printers can also lay down flat layers on top of each other to build 3D objects. The device can then solidify the printed object using, say, ultraviolet light. [The 10 Weirdest Things Created by 3D Printing]

However, the extremely high temperature at which ceramics melt makes it difficult for 3D printers to fuse ceramic particles together. The few 3D-printing techniques that researchers have developed for ceramics work slowly, and involve ceramic particles that cannot fuse together without resulting in some porosity that increases the tendency of the ceramics to crack.

"3D printing is a very important new capability, but so far, most materials that can be printed are not high-performance engineering materials," said study co-author Tobias Schaedler, a materials scientist at HRL Laboratories in Malibu, California. "We wanted to figure out 3D printing of a high-temperature, high-strength ceramic."

Now Schaedler and his colleagues have devised a method to quickly 3D-print ceramics using a special resin instead of powders. The result: strong, flawless ceramics with complex shapes.

The researchers began with a vat of resin containing silicon, carbon and oxygen. They shone a pattern of ultraviolet light beams onto this resin, causing it to harden where the light shone through it.

In 30 to 60 seconds, an item 0.5 to 1 inches (1.27 to 2.54 centimeters) thick can form, with a lattice or honeycomb shape, Schaedler said. The researchers then heat these objects to convert the material into silicon oxycarbide ceramic.

This new method is 100 to 1,000 times faster than previous 3D-ceramic-printing techniques, the researchers said. Furthermore, electron microscopy of the end products detected none of the porosity or surface cracks that normally weaken ceramics; indeed, these silicon carbide materials were 10 times stronger than commercially available ceramic foams of similar density, the scientists noted.

The researchers suggest that the strong, heat-resistant ceramics this new technique can make could find use "in a wide range of applications, from large components in jet engines and hypersonic vehicles to intricate parts in microelectromechanical systems," such as microsensors, Schaedler told Live Science.

Since ceramics are notoriously brittle, Schaedler said, "We are working to reinforce our ceramics with fibers."

However, it will take some time before these ceramics reach the market, he said.

"We are at the discovery phase. It will take at least five years for an application to be commercialized," Schaedler said.

The scientists detailed their findings in the Jan. 1 issue of the journal Science.