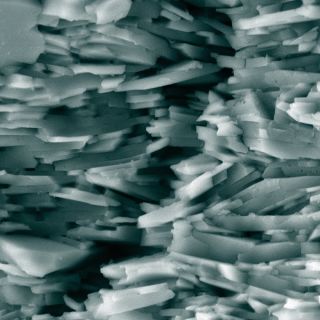 A crack must zig-zag its way through the stacked platelets in the new ceramic.
(Image: © Florian Bouville)

Thanks to a little inspiration from nature, new ceramics could be made from materials that make them stronger and tougher, researchers have discovered.

The new ceramics are inspired bya material called nacre, also known as mother-of-pearl. Nacre is much stronger and tougher than common ceramics and is derived from the nacre of abalone, a small, single-shelled marine mollusk.

Strength is not the same thing as toughness. Strength is a material’s ability to withstand a load without fracturing, while toughness is the ability to absorb energy.

Ceramics are commonly used to make objects subjected to high temperatures, but they are also brittle — a ceramic beaker falling from height shatters rather than dents. To toughen ceramics, manufacturers combine them with other materials, such as metals or polymers. But such composites often have limited use. Polymers, for example, can't resist temperatures higher than 572 degrees Fahrenheit (300 degrees Celsius), which restricts their use in engines or furnaces.

From fragile to tough

Artificially created nacre, on the other hand, is much less brittle than ceramic, and can withstand temperatures of up to 1,112 F (600 C), making it useful for high-stress and high-temperature applications.

In nature, nacre is found both as the outer coating of pearls and as an inner layer of a mollusk's shell.  Calcium carbonate, which makes up 95 percent of nacre, is intrinsically fragile. But nacre is very tough. [Images: Mother-of-Pearl Under the Microscope]

This toughness is due to the way the nacre is built. The abalone marine snail uses proteins to create mother-of-pearl by incrementally developing calcium carbonate in a geometric pattern. The result is similar to a stack of tiny bricks, welded together with a "mortar" made of proteins.

In such a complex pattern, a crack would have to follow a very complex path to grow. As a result, the shell is incredibly resilient.

A group of scientists, led by Sylvain Deville and composed of researchers from the French National Center for Scientific Research (CNRS), Université de Lyon, Ecole Normale de Lyon and ceramics manufacturer Saint-Gobain, decided to mimic the structure of nacre. They detailed their study in a recent paper published March 23 in the journal Nature Materials.

First, the scientists used a common ceramic powder, alumina, composed of microscopic platelets. They mixed it with water, along with some other simple additives, and then poured the mixture into a mold on a piece of refrigerated copper.

The low temperature caused ice crystals to grow into the ceramic mixture, and the ice forced the platelets to self-assemble into well-aligned stacks, very similar to the structure of nacre.

Next, the researchers had to bond these stacks together with something similar to the proteins in nacre.

"This glassy phase mimics the role of proteins in mother-of-pearl, and was one of the key steps to producing a material that mimicked the properties of nacre," said Adam Stevenson of Saint-Gobain, one of the co-authors of the study. [Biomimicry: 7 Clever Technologies Inspired by Nature]

In addition to being about 10 times tougher than a conventional alumina ceramic, the artificial nacre stays tough even at sizzling temperatures of up to 1,112 F, the team said.

"In engineered materials, there has always been a trade-off between strength and toughness — strong materials have always also been very fragile," Deville told Live Science. "Our material combines the strength of a well-engineered material with the structure of nacre that forces cracks to take a circuitous path through the material. It is this circuitous path that makes the materials tough as well as strong."

The manufacturing process can be applied to other materials as well, Deville said. "The freezing process is a physical process," he said. "It is not strongly affected by the chemistry of the material that you are using. Thus, almost any powder, as long as it is in the form of platelets, can self-assemble via the same process."

Physicist Andre Studart of ETH Zürich in Switzerland, who was not involved in the research, said that "making ceramics tough and strong at the same time — as the authors have achieved — is one of the Holy Grails of materials scientists."

But the method does have limitations. "The main disadvantage is that the material is largely anisotropic," meaning the material does not have identical properties in all directions, Studart said. Wood, for example, is easier to split vertically than to cut horizontally.

And 1,112 F is a "relatively modest temperature, and it will be necessary to push the operating temperatures higher," said Eduardo Saiz Gutierrez of Imperial College London in the United Kingdom, who was not involved in the research.

Similarly, the man-made nacre is tough for a ceramic, but still not as tough as a metal, Gutierrez told Live Science.

"Is there a way to further manipulate the structure?" he said. "Or, if we play with similar structures, which will be the ideal material combination?"