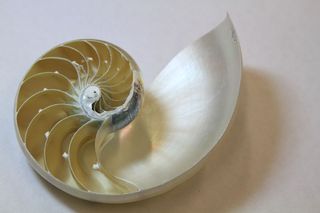 Mother of pearl on the inside of a seashell.
(Image: © Pablo Zavattieri)

Seashells are pretty tough cookies, and now researchers may know why: The mother of pearl that coats the inside of the shell is arranged in a brickwork structure that makes the shell both tough and strong.

Abalone seashells are made of two layers, an outer brittle layer and a tough inner layer that is made of mother of pearl, or nacre. If something pierces through the outer layer, the sea snail inside will still be protected by the nacre.

Surprisingly, this natural armor of nacre is about 95 percent chalk. And anyone who has written too hard on a chalkboard knows chalk is brittle and can easily shatter. The other 5 percent of the material is made up of more than 30 proteins, which act like the caulk that holds the chalk "bricks" together.

"The seashells took some very humble materials, chalk and proteins, and made something a lot tougher," Kalpana Katti, a materials engineer at North Dakota State University who was not involved in the study, said.

Material scientists "want to duplicate the structure of the seashells," Katti told LiveScience. The finding could help to inspire innovative materials for use in outer space and transportation technologies.

Strength and toughness are actually two very different things in the material science world. Strength is how much of an impact a material can take before breaking, while toughness is a material's ability to absorb such an impact without a crack forming. For instance, glass and silicon are good at resisting bending, but when they reach a certain point they shatter because they can't absorb any more energy. Steel is tough, so it can bend without shattering.

Most materials involve a trade-off between these two properties.

"What makes this natural material unique is that it is composed of relatively weak constituents," study researcher Horacio Espinosa of Northwestern University told LiveScience. The way these weak components are structured, however, "results in a material that well outperforms its individual constituents," Espinosa said.

Espinosa's team found that the nacre components form a miniature structure that looks like a brick wall. The bricks are laid out in alternating fashion (junction in one layer is near the center of the bricks above and below it), which stops cracks from propagating, giving the material its toughness.

When they looked closer, the researchers also found this patchwork-like microstructure also imparts strength, because the bricks are shaped in a very peculiar way: they are wavy.

Espinosa and his team noticed that these bricks "have an inherent waviness in their surfaces" and they dovetail at the ends, Espinosa said. "As a result, they tend to interlock as they slide relative to each other when disrupted, spreading damage and dissipating energy over large areas."

In other words, this waviness enables the nacre to resist bending without breaking the brittle material it is made of. When a force is applied that would otherwise cause the bricks to deform and pull apart, leading to a crack, the interlocking of the wavy bricks spreads out the energy.

The researchers took what they learned about the nacre's fancy brickwork and built a model material that has the same wavy-brick effect. These kinds of material structures could be used in the new wave of "nanomaterials" that are sweeping technology, like carbon nanotubes and graphene reinforcements used in nano-scale structures.

Such materials are being considered for outer-space applications, light-but-strong airplane armor, uses in transportation or in the building of lightweight bridges, and even as material for durable batteries that could double as structural components — for instance, the plastic that encases your laptop could double as its power source. Still, Zavattieri admits such applications are far in the future.

Katti said more work is needed to fully understand and replicate the complexity of nacre. "The organic in nacre is a cocktail of 30 proteins, and we don't know the structure of even one," she said. "The mechanics of nacre is very complex, a very complex hierarchical structure."

The study will be published online today (Feb. 1) in the journal Nature Communications.